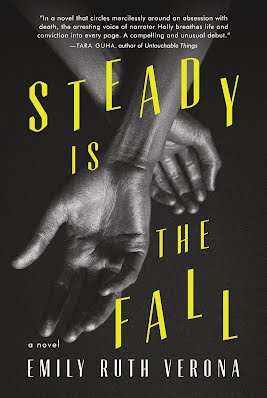 Holly Dorren can't breathe. Think. Feel. Her cousin is dead. Nothing will bring him back. And nothing will ever make her whole again.
In the days following Larry's funeral, Holly begins to reflect on the childhood they shared. She looks for answers in both the past and the present, convinced that understanding his fascination with death might somehow allow her to cope with his absence. She doesn't want to disappear, but already she's fading away from the life she's led.
Holly knew her cousin better than anyone, she was his best friend, and yet there is still a great deal she cannot accept in their relationship. In him. In herself. She doesn't know how to move on without him, but refusing to accept his death carries it's own devastating price.

Emily Ruth Verona is the author of the novel Steady Is The Fall. She received her Bachelor of Arts in Creative Writing and Cinema Studies from the State University of New York at Purchase. She is the recipient of the 2014 Pinch Literary Award in Fiction and a 2014 Jane Austen Short Story Award. Previous publication credits include work featured in Read. Learn. Write., The Lost Country, The Toast, and Popmatters. She lives in New Jersey with a very small dog.

Purchase Links
Publisher:  http://www.blackrosewriting.com/literary/steady-is-the-fall
Posted by Tonya Allen at 4:00 AM