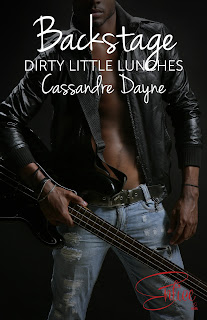 What’s on your menu for lunch today? A wicked tryst perhaps? Christopher Dark doesn’t mind being the hottest ticket on the alternative rock circuit, but the fans are driving him nuts. Continually signing glossies and having photo after photo taken of him in his garish attire is growing old. There has to be a better way of giving back to the community while pushing his career into the stratosphere. Sales are low and his livelihood is on the chopping block. Suddenly a rather creative thought comes to him after a provocative conversation and a competition is born. Now if only he can coerce his manager into agreeing. Renowned Chef Dusty Weathers isn’t the kind of man to follow any rock star, but there is something about one particular heavy metal band that speaks to his deep and very dark needs. The lead singer is every man’s fantasy. Still, he’s sworn off relationships after a horrific betrayal, one leaving him questioning more than just love. When a very interesting contest is announced over the airwaves, he’s intrigued by the idea. Encouraged by his overzealous staff, he researches every aspect about the intriguing man and designs a rather sinful banquet for the star. Is this a dirty little lunch in the making or something else entirely? 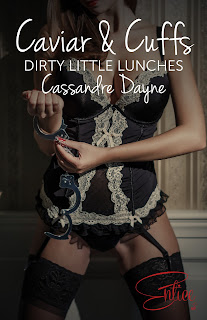 Shila Miller is always hungry, for her sexy boss that is. There’s something about Devon Thompson’s long, dark hair and steel blue eyes that simply drives her into madness. Sadly, touching isn’t allowed on the menu at Thompson, Tyler and Poole – the poshest advertising firm in all of Atlanta. Then again, how could he love a frumpy girl like herself? But oh she can fantasize... Tasked with developing a sizzling catering event for a select few clients, she designs not only what she believes is the perfect menu, but one that will also entice her divorcee boss. If only he notices her. Devon is a ladies man and while he knows it, he’s tired of sitting on the hot seat. The woman he craves doesn’t seem to notice his directness. Or care. Shila is all woman and the most accomplished assistant he’s ever worked with. He simply has to have her and the one chance he might have will involve a dirty little lunch in the making. In truth, he has to question his rather sinful motives and whether she’ll consider becoming more than just his employee. After all, he wants to own more than just her heart. He requires her complete submission. 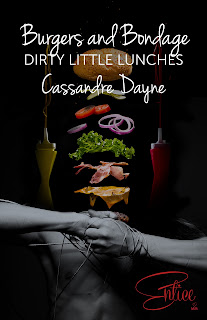 What’s on your menu for lunch today? A wicked tryst perhaps? Birthday boy Montana Devereau should be celebrating turning thirty. Instead, he’s buried behind a mountain of work, planning on skipping lunch in order to get home early. Unfortunately, there’ll be no one waiting for his arrival. When fellow employee and all around bad boy, Brad Swimmer, asks Montana to lunch with the guys, he’s intrigued. After all, he’s had a crush on the golden haired God for years, but the rough-hewn hunk has never given him the time of day. Saying yes, Montana settles his thoughts on a simple burger and a beer. Too bad the guys have kinkier thoughts in mind. When they take him to an unassuming brownstone smack in the middle of town, Montana surmises something’s up. With a name like Burgers & Bondage, their lunch suddenly becomes more of an adventure. In truth, submitting to a man is Montana’s darkest fantasy. Is this a dirty little lunch in the making? 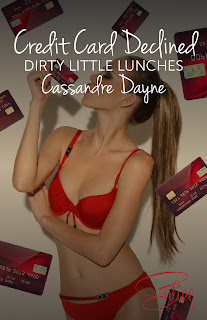 What’s on your menu for lunch today? A wicked tryst perhaps? Natasha Spencer hungers for her boss, RT Brace, but the hunk doesn’t know she exists. Then again few at his advertising firm have ever learned anything about the mysterious and very wealthy man. During one luncheon adventure with a friend, she’s coerced into picking out a few naughty pieces at Victoria’s Secret - lingerie designed for seduction. A brazen hussy she isn’t, but a dazzling corset and matching thong is just what she needs to fuel her fantasies. After their adventure, they enjoy a late lunch and prepare to return to work. When Natasha pulls out her credit card to pay the bill, she’s shocked – it’s not only declined but also reported stolen. To her horror, the restaurant manager calls the police. As she’s led away in handcuffs and directly to a waiting limousine she realizes she’d been duped. When the man of her dreams opens the door, offering a tasty way of paying off her debt, there’s no way she can refuse. Eyeing the chocolate-laced restaurant manager as a passenger, Natasha shivers. A dirty little lunch is in the making. 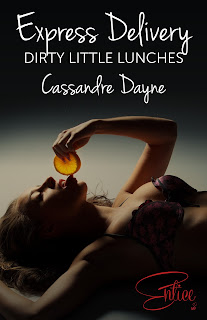 What’s on your menu for lunch today? Randi Reynolds is in the mood for something hot and sweet for lunch. Her craving is in the form of one scintillating man she’s been pining over. Months of ordering delivery, where Tomas Garcia works, only garners Randi a casual hello. It’s time to kick up the heat. On a sultry afternoon, Randi enlists the help of her best friend and together she and Tanya allow Tomas to see just how close they truly are. Intrigued, when she orders take out the next day, he arrives a different man--ready for an adventure. A dirty little lunchtime ménage is the perfect addition to the menu. 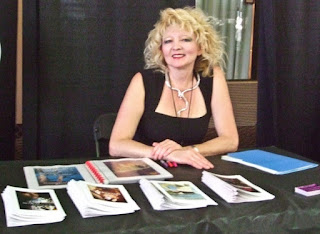 Cassandre Dayne is the award winning, best selling author of over one hundred and seventy books She is also a blog talk radio host of ‘The Edge’, highlighting authors, publishers and other artists who take their creative pieces to a raw and unconventional precipice. Her works as Cassandre have delved into various aspects of BDSM, D/s, edge play, domestic discipline, LGBT, poems and dark thrillers in books as well as her widely read blog. She also has a love of all things terrifying and pens horror and paranormal pieces. Cassandre is an advocate for education and continued understanding of a true D/s lifestyle, one widely mistaken as a form of abuse. With her co-author, Christian Jensen, she’s written several books that are considered edgy and terrifying. The books will be publisher by Booktrope under the Edge Imprint. She won second place for the paranormal ménage of the year for Bad Things from the Paranormal Romance Guild as well as Honorable Mention with RWA Passionate Ink for Treats in a Plain Brown Wrapper. She’s also received several other awards throughout her career. She is the Managing Director for the Entice and Edge Imprints for Booktrope. She’s a proud member of: The International Thriller Writers The Australian Romance Readers Association EPIC