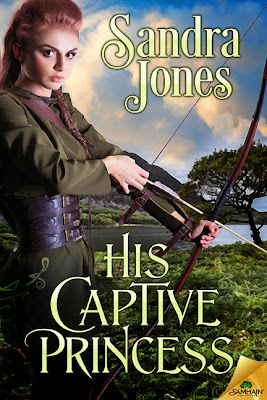 Earned respect is sweet, but deserved revenge is even sweeter.

Warren de Tracy was assured the Welsh village of Dinefwr would be an easy conquest, as would the widow of its fallen prince. Wedding her will appease the locals and win the respect of his liege, the usurper King Stephen.

Instead, Warren is ambushed, taken prisoner by a hooded Welshwoman with skin that glows like moonlight. If he must die at her hands, at least his honorable death will silence the whispers of disloyalty hanging over his name.

Princess Eleri has never seen a knight as stoic—and as eager to die—as Warren. She’d love to oblige the bastard, but something in his ocean-blue eyes stays her hand. Plus, suspicion nags at her, for the arrows that wounded him and killed his men are Norman, not Welsh.

A ghostly prophecy portends danger that thrusts the enemies closer together, where hate explodes into passion that won’t allow Eleri to surrender Warren to her vengeful clan. But returning him to his king breaks more than it mends…and for Warren, retaliation will be sweet, indeed.

Warren de Tracy had led battles on two different continents against formidable enemies of the Church and his Norman kings, and for his efforts he’d won spurs, a barony, more than a few scars and a complete lack of fear, which had served him well. Ironically, of all his venerable foes, a lowly dog killed him.

He watched the speckled greyhound resting on its dead master’s chest, growling low at him, the stranger in its territory. The mongrel had already betrayed his Welsh owner’s hiding spot in the dense thicket by protectively snarling at one of Warren’s mounted knights. Then his hotheaded young soldier had wheeled back for the rebel enemy without caution, earning him a fatal arrow to the heart.

Making perhaps the worst tactical error of his life, Warren had followed to check on his fallen man. The dog, far from done, howled over its master’s fate, thus calling attention to Warren’s presence, too. That was when an arrow from God-only-knew-where in the surrounding woods took him by surprise, its force unseating him. Quick and efficient, these archers were so stealthy he’d never seen their faces.

Now left to travel afoot with a useless sword arm, Warren collapsed at the base of an ancient yew a few yards away from the two bodies. He stripped off his gloves and snapped the arrow’s wooden shaft in half, leaving the barb lodged in his muscle. Ice-hot pain exploded through his chest.

“Sang Dieu!” He cradled his throbbing arm and waited, head swimming and shoulder bleeding, as the voices from the skirmish went silent.

All five of his men were dead. He felt it in his bones. Soon he would join them, but not nearly soon enough.

Ever since King Henry had died earlier that year, the Welsh princes had led revolts trying to take back lands they had lost in the Norman invasion. King Stephen, the new usurper, had ordered Warren to claim the Welsh Deheubarth camp of Dinefwr for Warren’s own. All Warren had ever wanted was to gain the respect of his liege. King Stephen had also told Warren to take one of the Welsh princesses for a bride, which, along with promises of clemency and protection, would surely appease the locals. Furthermore, his liege had suggested, the widow of one of the recently fallen princes would be “receptive” to the offer.

How wrong the king had been.

If only Warren had known there would be a rebel spy waiting upon the shore when they landed. Now the entire conroi was dead as a result.

At least none of Warren’s brothers had been with him this time. He could die without more shame hanging over his head. His half-brother would live to look after their little sister. With Warren dying honorably in battle, there would be no more questions of his loyalty, no more whispers of treason.

The dead soldier’s quick end was a blessing compared to Warren’s wound. The arrow in his shoulder wouldn’t budge, proving it was a ruthless Norman barb, probably stolen from one of Warren’s men, and the broken shaft offered no purchase with which to maneuver it. Each time he touched the splintered wood, a burst of fire spread through his chest. His heavy sword was meant for hacking bone, not useful for quickening his death, but perhaps he could knock himself unconscious while he waited for the arms of everlasting rest.

He leaned against the tree and battered the back of his skull, but the beating only made his head ache and his vision blur. The agony of his shoulder remained.

He closed his eyes before the reeling made him vomit.

Despite the absence of wind, the nearby trees rustled softly. Warren cracked an eye open. A hooded rebel stood near De Gouin’s body. As silently as the first, another dark-hooded figure dropped from the branches above. Dressed in deerskin chausses and heavy tunics, they studied the soldier’s corpse. Bon sang!Welsh rebels. Or Cymreig, as they called themselves. The smaller one nudged the dead knight’s arm with a booted foot. Bows resting casually on their backs, the pair hadn’t seemed to notice Warren.

His left hand tightened around the sword’s hilt. One good throw would fell one of the lightweight bastards, but he had no way of fending off the other.

As if sensing Warren’s intentions, the greyhound’s growl deepened, and it glanced uncertainly between Warren and the rebels. The archers were still too far away to hear, too absorbed in retrieving his soldier’s weapons, but the dog might change that. His barking would bring them around, turning their attention to Warren. He couldn’t let that happen. He was ready to die but not to be shamefully taken alive as a hostage for the local chieftain, where he would surely find unimaginable tortures.

He adjusted his grip on the sword in his left hand. His arm shook from the loss of blood.

The beast hunkered over his master’s body, putting more of its belly on top of the man’s chest. Caesar, Warren’s own trained mastiff, would do the same. Now staring into this animal’s brown eyes, he saw unwavering loyalty and trust, so like Caesar’s.

The greyhound licked the dead Welshman’s face, and the sight put a knot in Warren’s throat. He’d never harmed an animal before, nor would he this day.

Before the wary tension in his muscles could relax, the dog woofed in his direction.

The enemies swiveled around. Assessing the situation, they drew their swords.

In Warren’s foggy vision, the two swarmed toward him like sylvan elves, multiplying as yet more rebels fell from the tree, at least a half-dozen of his enemies.

The first pair stood over him with weapons extended, while the newcomers surrounded their own fallen warrior and his canine.

“Gorthwr fud.” The one who’d kicked De Gouin spoke at him in a puzzle of confusing sounds, but the sneered tone was perfectly clear. More puzzling than the guttural language Warren had been trying to decipher since arriving on the Glamorgan shore a few days ago was the fact that the rebel’s voice was female, low and husky. The accented tones would be interesting, he reckoned, if they weren’t so full of hate.

He blinked hard to clear the cobwebs in his vision. A pale oval shape loomed before him, and soon he focused on a pair of dark golden eyes in a face with skin that seemed to glow as if lit by moonlight. She dropped her hood for a better look at him, revealing wild plaits of flaming red hair, which dangled around her perfect face. 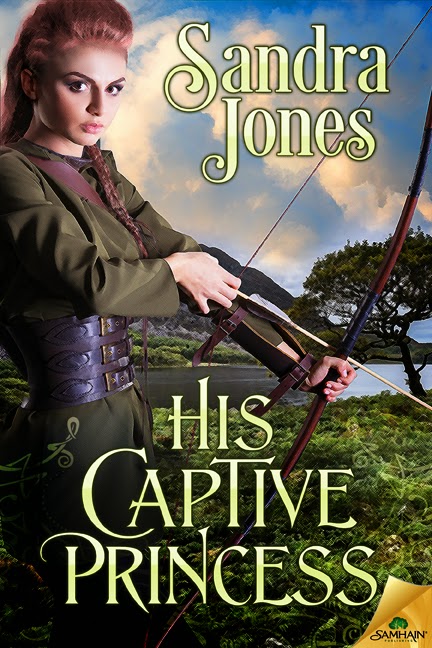 Sandra is the author of historical romances, including the River Rogues series, set in frontier America. With more than 20 years working as a bookseller and then a librarian, she found her true calling in writing. Always looking for the next story to tell, she makes her home on a river in the Ozark Mountains. When not working on her next book, she enjoys doing genealogy research (she’s a descendant of a Norman knight), playing cook for her husband and being the servant to her old grumpy tomcat. She has two sons in college and loves sharing lengthy discussions about the books they read. Sandra also loves hearing from her readers.