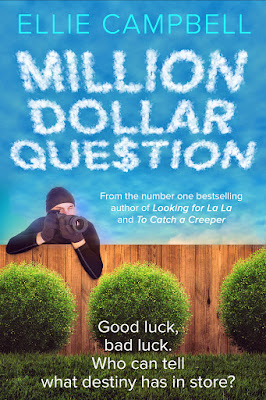 Just as a huge financial scandal ejects Olivia Wheeler from her high-flying Manhattan job and high-society engagement, a silver Mercedes pulls up at lonely single-mother Rosie Dixon’s house with a cheque for one million pounds from the Premium Bonds.  Two very different strokes  of luck.  And yet both women have more in common than they realize.  While Olivia struggles with the humiliations of surviving in London broke and homeless, shy unassuming Rosie discovers that unexpected wealth arrives with its own mega-load of problems.

Can a career-obsessed workaholic find a passion for something earthier and warmer than cold hard cash? And can Rosie sift through envy and greed to discover true friends, true family and even true love?

Two strangers who've never met. Yet neither realises how each is affecting the other’s destiny or the places their paths touch and fates entwine.
But will they surmount the slings and arrows of outrageous fortune?

That is the million dollar question.


Rosie Dixon perched herself on the hard plastic chair, watching the drawing take shape. A line, followed by a squiggle. Snake maybe? Then what looked like a head of a person with ears on top. And was that a saddle on its back or—

Finished, Emily pointed at the purple object. ‘What do you think that is?’

‘Um. Let’s see.’ Rosie peered closer. It vaguely resembled a bear, although how that fitted in with the ‘My Family at Home’ project, heaven knew. She didn't want to offend but… ‘What’s his name?’

‘Bear?’ The girl shook her two perfect bunches and wrinkled her tiny freckled nose. ‘It’s not a bear, Miss, it’s a chocolate Labrador. Mummy’s boyfriend has one. Durr…’

Not that Rosie didn't appreciate being called Miss, she did. Made her feel like a teacher, although the rather less grand title of ‘Teaching Assistant’ suited her fine. She’d been working at Avondale Infants for eighteen months now, supporting primary-aged pupils in classes of thirty-plus without needing to fret about parents’ evenings, lesson plans and the mountains of paperwork expected of a real teacher. She loved the small children and the hours meant she could still collect her own two sons from junior school.

‘Miss?’ Max, angelic curls disguising an impish spirit, frowned at his latest creation. ‘Can you help me?’

‘Shove over then.’ She nudged him playfully, as she squeezed beside him. Who’d have ever thought that she, shy little Rosie, always too timid to raise her hand in class, would be making a difference, however small, in the world of education? Just showed that good could come from the direst of situations. Even if it had taken a broken heart and some other God-awful trials to get her here.

She tucked a lock of shoulder-length hair behind her ear and handed Max a glue stick.

All things considered she really was incredibly lucky.

Mid-morning, the kettle in the staffroom had boiled and Rosie’s fellow teaching assistant, Gemma, was handing round the custard creams. Also in her early thirties, Gemma was recently divorced and had a secret obsession with The X Factor’s Simon Cowell that Rosie was sworn, on pain of death, never to reveal.

‘Anyone got an astrophysics degree?’ Carol, teacher of Orange Class, leafed through a stack of forms, eyebrows furrowed. ‘Certainly need one to fill in all these bloody risk assessments. Talk about ’elf and safety!’

Rosie joined in the laughter as she dropped a teabag in a smiley face mug. She was about to ask her colleagues, flopped onto chairs for their short break, if they were all right for beverages when Pauline Dawkins, Admin Officer, sidled up, a giant birthday card tucked under one paisley-clad arm.

‘Barry’s fiftieth. Whip-round,’ she hissed, spy-like from the corner of her mouth, as if the sole male teacher might burst in and discover the dastardly plot. ‘Drinks and cake at four.’

Pauline took her charge of The Birthday Book extremely seriously. Rosie had suffered the same ordeal when she’d turned thirty-three in March.

‘Oh, I’d love to be there, but I've my sons to pick up.’ Dutifully she scribbled, ‘Have a great day, Barry!’ unable to conjure anything witty or mildly original.

The envelope under her nose was stuffed with pound coins and larger notes. Rosie opened her ancient leatherette handbag, pushed aside her soggy egg sandwich and peeked inside her purse.

A lonely fiver lay folded next to a single fifty pence piece.

Her heart sank. That cash had to last the next two days until her monthly salary reached her bank. The twins, being eleven, always needed money for this or that and Charlie’s cheque was late again.

But then again poor Barry had recently lost his wife. Fifty pence seemed so stingy and she’d never dare offer the five pound note and ask for change.

There was an uncomfortable beat. Rosie’s fingers froze. Nobody was paying attention but still damp pooled in her armpits and along her hairline, her insecurities running rampant under Pauline’s scrutiny.

Was she assessing the havoc a runaway husband could create? Maybe worse – thinking it no wonder he’d strayed? If Rosie had once felt young, pretty and loved, it had all vanished with the end of her marriage. She cursed herself for not finding something smarter to wear than the skanky black cords pilled from the washing machine and a faded cotton blouse (Selfridges Sale 70% off) which sagged where it used to cling. And she’d totally messed up her hair attempting to add subtle honey-gold streaks from a Superdrug box to her mousy-brown frizz and ended up with tiger stripes instead.

Blow it, she thought, and handed over the fiver with a flourish, smiling to silence the warning pang from her gut.

‘Ta ever so.’ Pauline stuffed the note in the envelope. ‘We want to buy him a special present. Poor devil’s all on his lonesome…’ She broke off, fiddling with the plastic ID badge dangling from her neck. ‘I didn't mean…well, it’s different for you with those darling boys, never a dull minute in your house, I’m sure.’ Her eyes fired with matchmaking zeal. ‘Now there’s a thought. Don’t suppose you and Barry…?’

‘No. Really.’ Rosie tried looking appreciative instead of appalled. Bearded bespectacled Barry was even more tortuously shy than Rosie and any attempts to speak made him extra nervous. They only had to reach the kettle at the same time and Rosie could feel her hands sweat, watching him twitch and stammer. As for fireworks, there’d be more sparks with two squibs in a rainstorm.

‘Just an idea.’ Pauline shrugged it off. She was basically a kind woman, Rosie thought, whatever catty things people said – just maybe a touch too blunt for the fragile sensitivities of a mostly female environment. And it must be excruciating asking people to hand over cash.

Pauline left to corner someone else and Rosie slumped onto an empty seat, tea forgotten. Two years since Charlie had walked out and no one – except Rosie in the secret corners of her soul – believed he was ever coming back. The beautiful home they’d spent ages lovingly doing up had been sold, Rosie and the boys now installed in a tatty two-bed terrace in a scruffy housing estate, where luckily the neighbours had welcomed her as one of their own.

Better off without him, everyone declared. What self-respecting woman stayed with a cheat after all? Outraged friends wanted him to suffer and occasionally Rosie did too. Not in a nasty, vengeful way, but at least to experience a few twinges of her own devastation.

She had fantasies in which he came crawling back, grief-stricken over what he’d carelessly tossed aside. She’d imagine herself on the arm of Colin Farrell, wearing a fiery-red figure-hugging dress, strikingly elegant, flawlessly made-up, her belly flat and her legs mysteriously three inches longer. She’d be ice-cool, telling him it was too late but usually in these daydreams – and she knew it was wrong – just as Charlie left, dejected, her stony heart would relent, she’d apologise to Colin, kick off her heels and run to Charlie’s joyful arms.

Other times her sleep betrayed her. She’d walk in the kitchen to find Charlie cooking spaghetti bolognese, wearing only a chef’s apron and an endearingly rueful smile. Silly stuff. Like last night – they’d sat in the bath together, him soaping her back. So convincing was this dream that in the morning she’d lazily stretched out her arm to him, forgetting that his side of the bed was empty and cold. He’d been her best friend and lover for so long. Not easy persuading her subconscious to switch from love to hate. Or even indifference. And he’d been such a caring father to Luke and Tim. Were they truly ‘better off without him’?

Determined not to submerge into despondency, she jumped up and tackled the backlog of crockery clogging the staffroom kitchenette.

Damn. She’d thought she’d got past all those predictable emotional stages, familiar to her as commuter stations. Denial. Shock. Anger. Depression. Last stop – Guilt – where she still lingered, scolding herself for not leaping to action the second Charlie’s secretary warned her about the female customer who showed more interest in the showroom’s Sales Manager than the vehicles on sale.

And why hadn't she? Jumped? Leapt? Fought?

Because it had been unthinkable. Laughable even. With the red flag flapping inches from her face, Rosie had brushed it away with a smile, too certain of her husband to fall for that alarmist nonsense. This was Charlie, after all, her soul mate, who’d rescued her in her darkest hours, made her believe in her own worth after years of her mother’s jibes. He loved her even if she had grown two dress sizes finishing the kids’ meals, barely ever wore make-up, slumped around the home in baggy sweatshirts and couldn't stay awake to watch an entire film when the boys were finally in bed.

‘…first out. Hey, what’s so fascinating about that sponge? You've been staring at it ages.’

Rosie hadn't realised Gemma had joined her at the sink, let alone that she’d been speaking.

‘I was saying that as long as it’s not last in, first out, ’cos technically speaking…’ Gemma pushed her glasses up her nose and gave Rosie a meaningful glance before picking up a tea towel.

Gemma sighed as she wiped a saucer. ‘Rosie, you dingbat, did you hear a word I said? That meeting with the union reps yesterday, Carol’s just filled me in. They’re talking staff cuts. Redundancies. Teaching assistants in particular. Some of us – God knows how many – are for the chop!’ 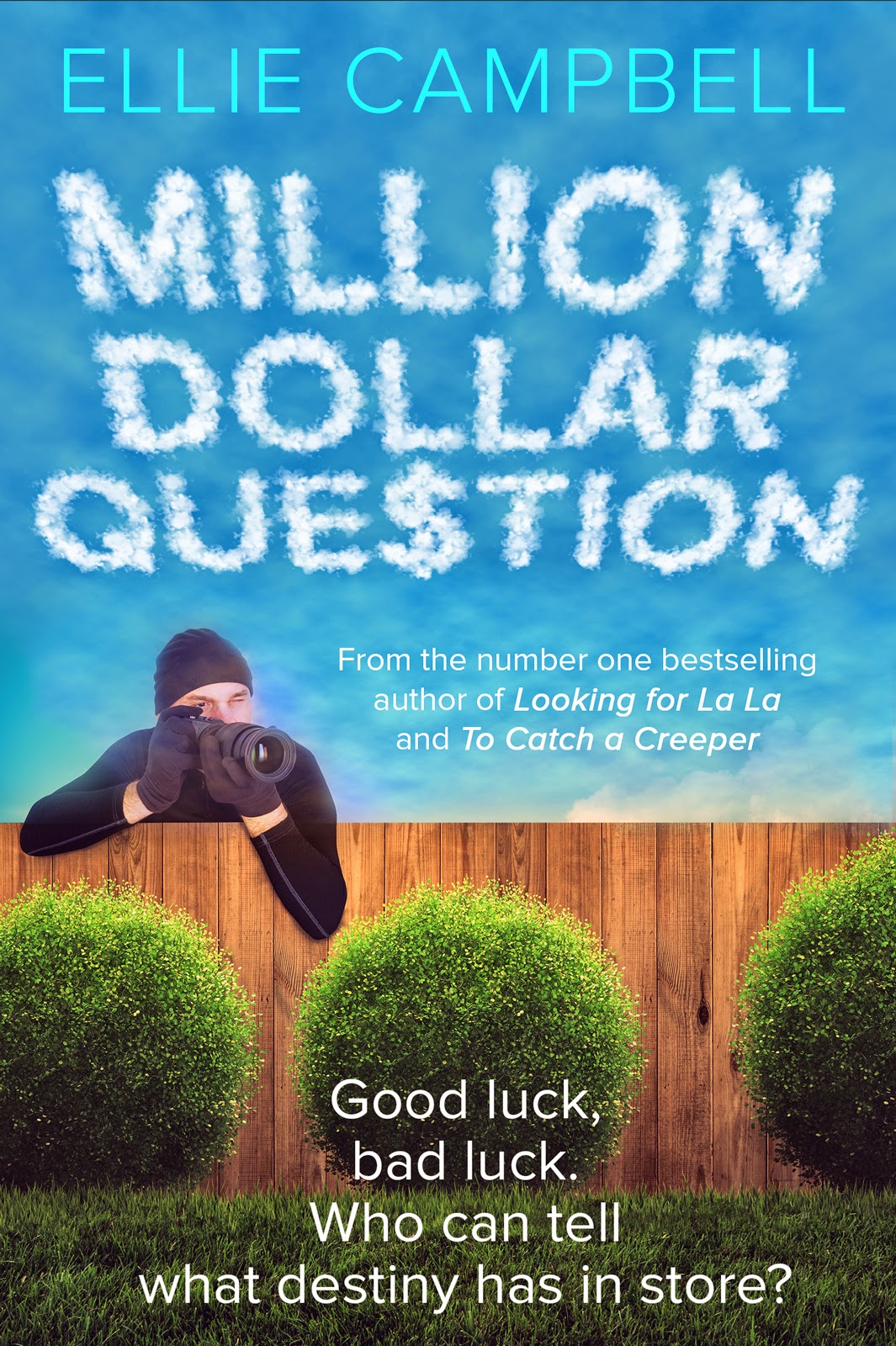 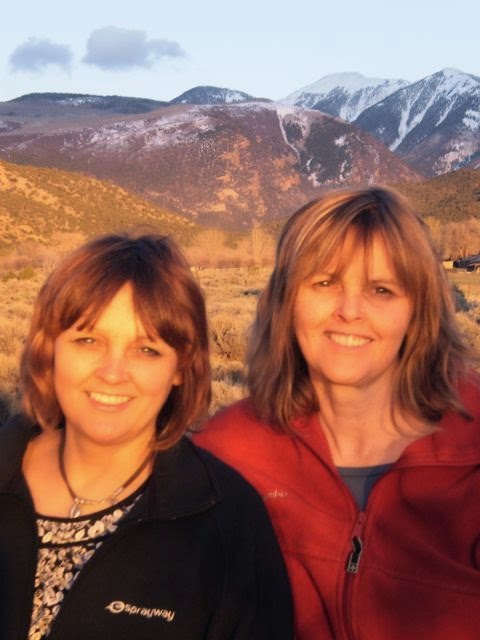 Ellie Campbell is a pseudonym for sisters, Pam Burks and Lorraine Campbell who collaborate across the mighty Atlantic, finding writing together the perfect excuse for endless phone conversations.  They are equally passionate about travel, animals and the great outdoors. Although Pam lives near London, with husband, three children and a dog, while Lorraine is on a Colorado ranch near wild and wonderful Boulder with husband, five horses, five cats, one dog and four chickens – they both believe in enjoying life to the fullest, be it discovering new remote locations or going on trail rides in the beautiful Rocky Mountains.