**RELEASE BOOST** The Curse Of The Blue Scarab by Josh Lanyon 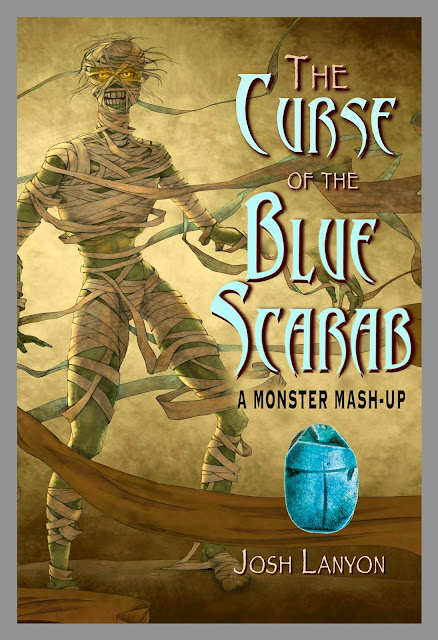 Who or what is responsible for the gruesome deaths of members of the secret society known as the Order of Osiris?

Dr. Armiston, an irascible, confirmed bachelor who believes in medicine not mysticism, is certain the deaths are only tragic accidents.

The members of the Order of Osiris suspect something more sinister is at work. They profess to believe an ancient curse has been visited upon their society. Handsome and mysterious Captain Maxwell requests Armiston’s help.

Tarot cards? Egyptology? Spiritualism? Armiston has little patience with the superficial and silly pastimes of the rich, but he does love a good puzzle. Or could it be that he is more drawn to young Captain Maxwell than he wishes to admit?

Either way, Armiston must solve the secret of the cursed sarcophagus very soon, for Captain Maxwell is the next slated to die… 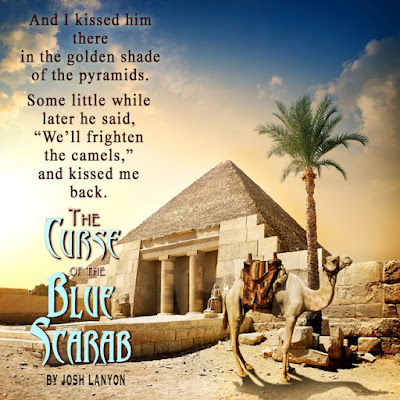 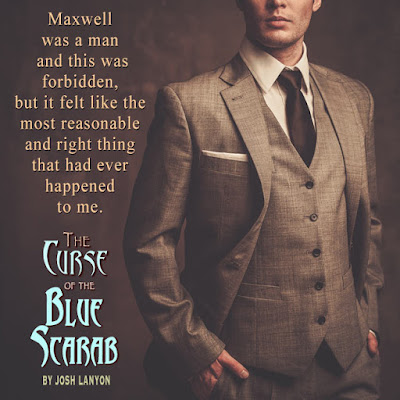 I found the place in a quiet back street some three minutes’ walk east from Piccadilly Circus. A gilded sign in the shape of a banyan leaf hung over first-floor windows.

The Banyan was not a club, but an eating-house, with rather a special clientele. It was run by a retired quartermaster, who somehow made his little pile in India. The man spoke Persian and Burmese and worked the house with Indian servants. He catered to Anglo-Indian tastes. It was the first place I was given a spoon for my curry.

According to Maxwell, men had been known to come home cursing India and all its ways—and yet turn up at the Banyan within a month. He said he went there principally to keep up his Indian vocabulary, but the fowl-curry, the chutney, and the fruit were all excellent and well worth the visit.

Though Maxwell was not a sophisticated raconteur like Maundeville, he was good company and sincerely charming. In fact, he was disconcertingly attentive. It was quite a heady thing to have his complete and unadulterated concentration. I could see no reason for it.

“How did you happen to become a physician?” he asked curiously as I finished a long, involved story that even I could see no point to.

“My father was a doctor,” I said. “One of those good old-fashioned country doctors who shepherded his flock in and out of this life for nearly the length of his own. He was greatly loved by everyone who knew him, and I thought that would be a wonderful thing. To be able to take away pain and suffering. And to be greatly loved.”

It was the truth, but it was more than I had meant to say.

“It is a wonderful thing to be able to take away pain and suffering,” Maxwell said after a moment.

“Yes. What I failed to understand was how difficult it would be when, no matter how hard you try, you can’t manage it. Or when your best effort fails to save a life. It’s a dreadful thing to have a child die in your arms.”

Maxwell’s somber expression no doubt matched my own. I said hastily, “Happily, most of my practice amounts to lancing boils and handing out headache powders.”

“Oh, it’s quite true. I’m not complaining. The grand career I imagined for myself would have been contrary to my own nature. I like a quiet, comfortable life.”

He stared at the ale in his glass. “You never married?”

“No, no,” I said too heartily. “No woman would have me. Congenital bachelor, I’m afraid.”

Maxwell’s eyes flicked up. He met my gaze and offered a faint, enigmatic smile.

It was not easy—in fact, it was impossible—to get him to speak of himself. Nor did he broach the subject that had inspired this tête-à-tête until at length we settled in a quiet corner of the smoking-room.

“Now,” he said with a sort of grim cheerfulness, “we’re fortified and steadied by an excellent dinner. We shall take a common-sense view of the matter before us.”

“The matter before us?”

“Your continuing involvement in this case.”

“It’s quite simple. To begin with we have poor Scrymgeour and D’Aurelle. Both died suddenly, and apparently alone. You knew neither of them, but you certified one death and countenanced the certifying of the other although I believe you thought both those deaths were suspicious.”

I stared at him, unable to believe my ears.

“I believe you feel you’re partly responsible—since you certified those deaths—for the fact that there has been no further inquiry. I think, too, that you joined the Society of Osiris because of those deaths, and that you have those certificates on your conscience.”

“What the devil are you talking about?” I exclaimed. “I certified what I believed to be true.”

“Would you sign them now?” he retorted. “I know you acted honestly at the time.”

“Of what exactly are you accusing me?” I asked very coldly, very quietly.

Maxwell met my stare without flinching. “It’s the truth, isn’t it? Your interest in this matter, your involvement—”

I said, “My involvement is simply one of academic interest. You and your friend have presented me with a mystery, and I mean to solve it. That is all.”

He nodded as though satisfied, though his expression remained uncharacteristically austere. I thought his eyes held an unnatural glitter, and I prepared myself for more unpleasantness. Even so, his next words were startling.

“In thinking over those two deaths, we must consider points of difference and of similarity. Both these poor fellows were bachelors, and both had independent means.”

“You believe their deaths are connected by something other than the Mummy?”

“I do. Perhaps you don’t know where their property went?”

I think I gaped at him. Not at the information itself, but the fact he had essentially accused the poor girl of murder.

I said as much, though I tried to keep my tone neutral. “Then you suspect Miss Hennessey of somehow engineering their deaths?”

It was Maxwell’s turn to look astonished. “Nora? Of course not. I bring up the matter only because you’re a bachelor too, though not so well provided as they were with this world’s goods. You’re an older man also.”

I laughed. He was rude and ridiculous, but I don’t suppose he realized that—or cared. “True on all counts, I’m afraid. Furthermore, I’m an observer, not a participant in this little misadventure of yours. So if your concern is for my safety, you may rest easy. I don’t believe either Miss Hennessey or the Mummy are after me.”

“I think you should retire from the case, all the same.”

I stared. He appeared to be quite serious.

“What’s brought about this change of heart?” I inquired. “You weren’t concerned for my safety five days ago.”

“Five days ago you weren’t taking tea with Miss Hennessey or having dinner with Maundeville. I—we—didn’t then appreciate the fact that there might be risk to you.” His throat jumped as he swallowed. He looked genuinely worried. “Enough people have died, Armiston. I wouldn’t like something to happen to you on our account.”

“You and Perceval have decided this between you?”

“Er…yes.” It was such an obvious lie, I almost laughed. I was too offended to find the situation humorous, however.

“It’s not that we’re unappreciative.”

“No. You’ve expressed your appreciation most originally.”

His brows drew together. “We should never have dragged you into this matter. That’s the truth.”

“Possibly not. But you did—I won’t say dragged me because I joined the expedition willingly enough—invite me, and there’s no going back now.”

“Of course there is.”

I shook my head. “I told you both before that I did not need your permission to continue my investigations. Such as they are.”

He leaned forward, saying with quiet intensity, “You must stop, Quentin.”

I was so surprised he knew my Christian name it took me a moment to collect my thoughts. “Shall I tell you what I think this is?”

I shook my head. “I believe you’ve recently learned the cards are about to be drawn again. I believe you’re convinced that this time you’ll receive the Priestess. And I believe that you’re afraid that because of my…” I didn’t quite know how to phrase it without making matters more awkward than they were. I settled on, “…respect for you, I may act rashly and come to harm.”

Even in the muted light I could see he flushed and then paled. “I don’t think any such thing.”

“However great my…respect for you, I’m not a man prone to rash or incautious action. I’m not the dashing hero of a romance novel. Frankly, you would be better suited to such a role than I.”

He opened his mouth, closed it, and swallowed. “I wasn’t suggesting—”

“Let’s consider the matter closed. You’ve said what you needed to say, and I’ve given you my answer.”

“Very well,” he said stiffly.
Shortly after, Maxwell and I parted. I think he couldn’t escape fast enough. 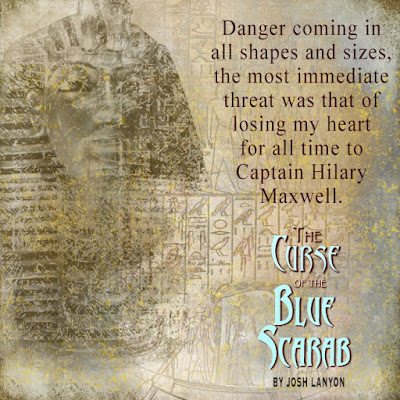 Her work has been translated into nine languages. The FBI thriller Fair Game was the first male/male title to be published by Harlequin Mondadori, the largest romance publisher in Italy. Stranger on the Shore (Harper Collins Italia) was the first M/M title to be published in print. The Adrien English series was awarded the 2nd Annual All Time Favorite Male Male Couple by the Goodreads M/M Group. Josh is an Eppie Award winner, a four-time Lambda Literary Award finalist for Gay Mystery, and the first ever recipient of the Goodreads Favorite M/M Author Lifetime Achievement award.

Josh is married and lives in Southern California. 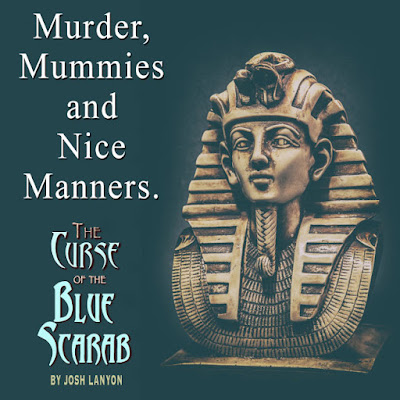