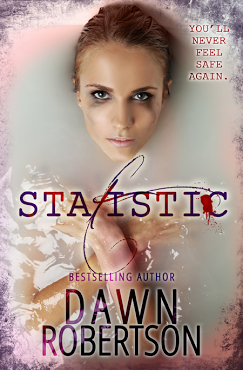 Love.
Betrayal.
Deception.
Attempted Murder.
Aurora Alexander is everything headlines are made of.

Newly divorced single mother Aurora Alexander is trying to move on with her life.
After a string of unsuccessful blind dates, she turns to internet dating.
Everyone does it, so it has to be safe. Right?

Are you ready to have your mind severely screwed? Are you ready to see how she became a statistic? Hold on tight and enjoy the crazy, roller coaster ride Dawn has wrote for us. Be prepared to have this book in the back of your thoughts for a long time after you shut your kindle off. Let's step into the world of internet dating.

Delving into the internet dating world is really a game of rush and roulette. You never know who you will meet.

Aurora Alexander, divorced mother is venturing back into the dating scene by entering the world of Fish of The Sea.

Brent- the widowed father, who is best just as a friend.
Wesley- the one night stand
Jackson- the one who is totally different from them all.
HIM- he watches her, wants her, needs her and will get her at any cost.

With a break-in at her home, Aurora feeling of safety is shattered. Moving to a new place, closing her Fish of the Sea account and just seeing where her and Jackson will go, is what she wants to do.

With life finally being better than ever for Aurora, news breaks of the mysterious deaths of women. She can't help but think it's one of her three guys, but which one?

That question will soon be answered. Will Aurora become a statistic?

"I'm their eyes, I am a hero. A modern day Theresa. The reality is that I am the devil himself. I am the dark shadow that creeps outside their windows at night. I am a monster who goes bump in the dark."- ?????

But ladies not everything is what it seems. Cancel all you're plans and make Statistic you're priority, believe me, you'll want it to be. You will get sucked into this story Dawn has weaved for us. We all know just by the name something will happen, but what? Shit, I was on pins and needles waiting for the shoe to drop, the crazy to pop up, the shit to hit the fan. Taking a Xanax was needed!!! I read the epilogue 3 times! Three damn times, I tell ya, and still couldn't believe what I was reading. I'm still shocked and its days later. Everyone isn't who they seem, I promise you that. But what are they hiding?! And after you pick your jaw up off the floor, you will be severely mind fucked by Dawn Robertson!!! Yes, I've been fucked by Dawn. I couldn't and still can't stop thinking about Statistic. Bravo Dawn, Bravo, for severely mind fucking me! I'm seriously needing a book about him, I need inside his mind. Pretty please with My Little Pony's on top.

Add this bad bitch to your Goodreads here
Posted by Unknown at 2:13 AM

Email ThisBlogThis!Share to TwitterShare to FacebookShare to Pinterest
Labels: Blog Tour, Dawn Robertson, mind fuck, Statistic, What one to trust