**RELEASE BLITZ With Giveaway** Heart Of A Cowboy by Kristin Vayden 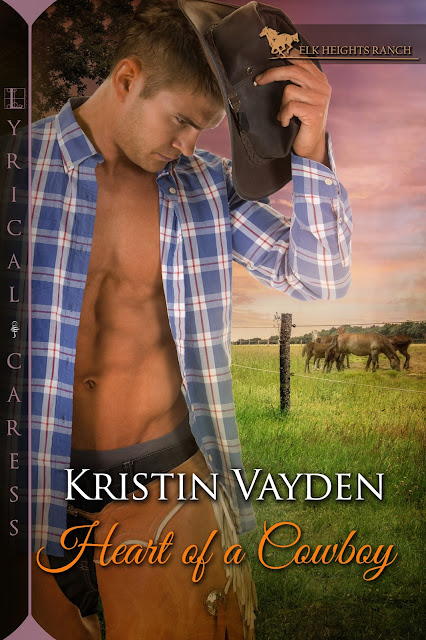 
A stubborn cowboy has sworn never to forgive or forget—but one special woman may find a way to change his mind . . .

Hospice nurse Laken Garlington helps people face the end with peace and dignity, surrounded by their loved ones. But the son of her new patient didn’t come home to reunite with his dad. So why is Cyler Myer back in horse country? It’s clear the sexy, six-three hunk with the steely eyes has a score to settle, and Laken doesn’t plan on being collateral damage . . . no matter how irresistible she finds the prodigal cowboy.

Dying is too good for the father Cyler will never forgive—not in this lifetime.
Showing up at his family’s Washington State ranch is the first step in his plan. But revenge takes a back seat to desire when Cyler meets a bossy beauty who arouses feelings he isn’t ready to face. As they work together to save an ailing mare, Cyler realizes he must decide where his true destiny lies. With darkness . . . or with the woman who offers the promise of redemption with every kiss. 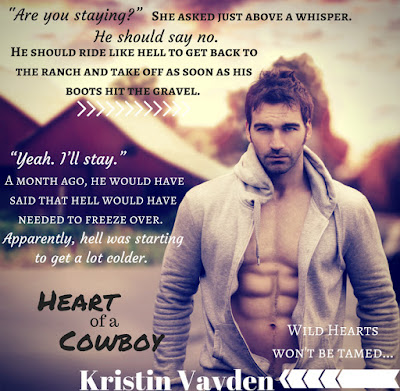 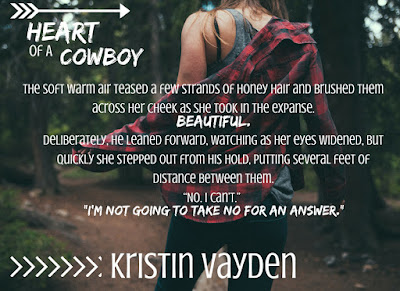 His gaze shamelessly took in her silhouette against the evening sun, and he edged closer. Yet with each step, it wasn’t enough. Rather like a magnet, she pulled him in, and he didn’t want to fight the impulse.
Softly, he reached up and tucked a loose strand of hair behind her ear, his body heating as she met his gaze, then shyly diverted her eyes. He traced his fingertips down her neck then gently grasped her shoulder, encouraging her to turn and face him fully. Anticipation flooded him. Her breath quickened, and her pink tongue darted out to caress her lower lip, enticing him. Deliberately, he leaned forward, watching as her eyes widened, but quickly she stepped out from his hold, putting several feet of distance between them.
“No. I can’t.” She wrapped her arms around her waist, hugging herself. Her eyes were bright with suppressed excitement, encouraging him.
“Why?” he asked, stepping forward.
Laken edged back. “This is the very definition of conflict of interest.” She arched a brow but grinned, her posture relaxing.
“I’m not going to take no for an answer.” He gave a small grin in return, taking a step closer.
She laughed, rolling her green eyes. “Why am I not surprised?”
“Just being honest.” He shrugged.


“Thank you. I think.” She chuckled again, the sound slightly nervous. “Unless you’re not interested?” He let the question linger, closing the distance as he watched indecision, desire, and hesitancy flash across her face. “That’s beside the point—”
“That is the only point,” he interrupted.


“I...I could lose my job.” She spoke quietly.
“Are you on the clock right now?” Cyler reached up, tracing the line from her ear along her jaw, pausing at her full lips.
“It’s complicated. But in short, no.” she murmured, her expression softening.
“Good.” Without giving her a chance to protest, he closed the final distance between them and sealed her lips with his.
At first contact, he realized the danger he’d just invited. It wasn’t just a kiss; rather, each nerve had come alive, demanding more. Angling his head slightly, he was able to capture more of her kiss, deepening the exchange as his tongue ran along the seam of her lips, begging for entrance. He could feel her hesitation melt as she leaned into him, her lips caressing his, inviting, intoxicating him with each touch.
As she opened her mouth, her arms tentatively grasped his forearms before sliding up to his shoulders then pulling him in tight. Cyler’s already- burning body smoldered deeper, demanding more than just a kiss. Yet he held himself in check, in spite of the pounding blood that seemed to overtake every other sense.
His hand slid up her back, mapping the delicate curve of her waist. Her tongue met his, stealing every other rational thought as he accepted her invitation and tasted the full flavor that was Laken. Her fingers slid up from his shoulders, threading through his hair and tugging, causing his heart to pound harder, his body to grow even harder as he pressed into her soft curves. He breathed in her soft gasp as he bit on her lower lip, pulling her in, leading her. He mated with her lips, fusing his with hers, searing his brand with each brush of his lips, each caress of his hand across her waist.
Abruptly she pulled away, her green eyes wild as they blinked up at him, staring deep into his soul. Naked in his eyes—yet fully clothed—she studied him, and the kiss had him off guard just enough that all the careful walls he’d constructed were still lowered.
Damn it all.
“So...that just happened,” she whispered, a hand reaching up to touch her pink lips. “Whoa.” She swallowed, his eyes capturing each minute movement, each tiny shift of her gaze.
Then she smiled.
“To be fair, I did warn you I wasn’t taking no for an answer.” He relaxed slightly, feeling less exposed and vulnerable.
“You did.” Her gaze flickered to the ground as her lips tipped into a lopsided grin.
“And I’ll be straight with you. I’m going to kiss you again.”
Her gaze shot back to his, widening slightly. “So, you’re saying I don’t get a choice?” She flirted.
He chuckled. “I’m saying you don’t really want one.”
She rolled her eyes. “A little sure of yourself, aren’t you?” She tucked her hands into her back pockets, regarding him.
He took a small step forward, leaning in to her before whispering, “You kissed me back.”
Her pert nose scrunched up. “Caught that, did you?”
“Yup. Pretty much.” He laughed softly, reaching out and tugging on her elbow, and she willingly released her hand from her back pocket.
“Fair warning?” she asked as he leaned in.
“Fair warning,” he murmured before taking her lips once more, astounded at how her warmth captivated him, and how his blood went to an immediate boil.
He’d expected her to moderate the kiss, and he’d been fully prepared to tease her, to test the waters to see how far she’d let him push, but what he hadn’t been prepared for was her response.
Rather than play hard to get, she returned the kiss with full force, biting his lower lip and fanning the already-burning flames. Her hands mapped his back, kneading, tracing, driving him crazy with each touch, reminding him that he could—should—be closer. He groaned as she tugged on his button-up shirt, sliding her hand up his chest, skin on skin.
He breathed in her sigh as he splayed his hands across her hips, pulling her closer then rocking her against him. He was taken by surprise when she kissed then bit him gently on the neck before quickly disentangling herself from his grasp and walking away.
Confused, he turned to watch as she glanced over her shoulder, giving him a teasing grin. “Fair warning.”
Cyler’s face broke into a wide smile, one that caused his cheeks to ache with an unfamiliar yet welcome pain as he watched her hike back up the hill. “Are you just going to stand there and stare, or are you going to hurry up? Daylight’s burning.” She taunted as she continued her trek toward the truck. Cyler rubbed the back of his neck with his hand, shaking his head, and grinning. “Is that how it’s going to be?”
“Are you complaining?” Laken turned, taking a few steps backward on a flatter portion of the hike.


“No, ma’am,” Cyler replied, starting toward her.
“Good.” She giggled and finished the hike with him not far behind. When Cyler reached Laken, he grasped her hand in his and kept it tight the whole way back to the ranch. The sunset’s glow made her face appear even more flushed, and he couldn’t help the smug satisfaction that he’d done that to her. It had been a long time since he’d felt that way, since he’d even wanted a woman to wear his kiss. It was disconcerting, yet electrifying all at once, but as much as he wanted to ride the wave of excitement, he felt the familiar suspicion creep in, the kind that made him question if this were truly real.
Because heaven only knew how he’d been fooled before.
Cyler glanced over to Laken, meeting her gaze and smiling before he back to gazing out the window.
The past was the past. This was a chance for a new future. Let that serve as fair warning...to his heart.


Kristin's inspiration for the romance she writes comes from her tall, dark and handsome husband with killer blue eyes. With five children to chase, she is never at a loss for someone to kiss, something to cook or some mess to clean but she loves every moment of it! Life is full—of blessings and adventure! Needless to say she’s a big fan of coffee and wine…and living in Washington she’s within walking distance of both! 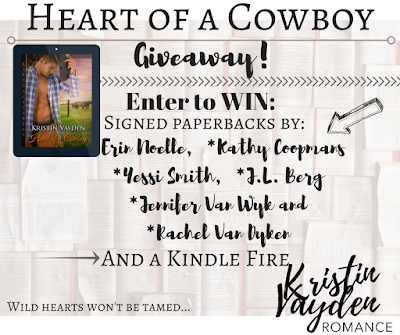 a Rafflecopter giveaway
Posted by Tonya Allen at 8:00 AM