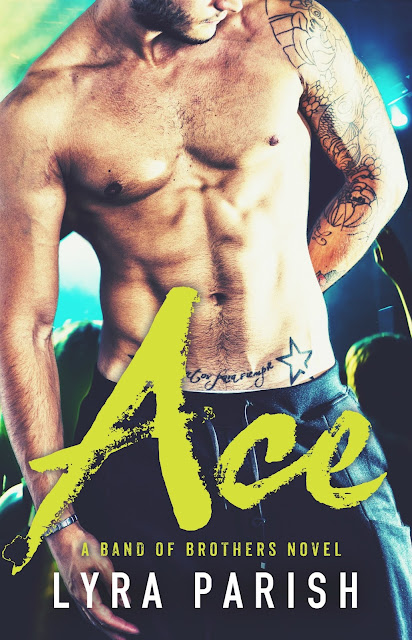 The truth is in my lyrics.
Uncontrollably controlled.
I bleed many things one being Rock & Roll.

My name is Ace and I'm the ace of spades.
Proceed with caution, because I'm sharp like a blade.

The Band of Brothers novels are full length and will follow each brother in the band.
They can be read together or separately. 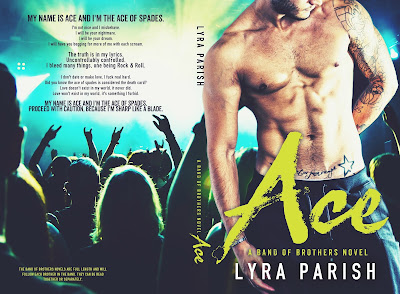 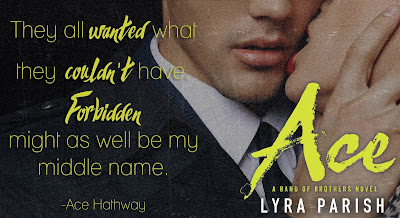 Tonight I would fuck the blonde in the front row who continued to visually rip my clothes off with every little blink she took. Her tits were hanging out of her shirt and she licked her lips and batted her eyes at me. The set was nearing the end and I could feel her gaze. When I looked away and back at her, it was like her eyes had never left me. I liked when a woman knew what she wanted.

Blue and green lights flashed over the stage then washed across the crowd. When we made eye contact again, her tongue traced the outside of her plump bottom lip and at that moment I knew she was DTF. Her being down to fuck made this so much easier but then again, being the lead singer of the Band of Brothers made panties magically melt. I'd be her fantasy for the night. I'm sure there would be many more one night stands considering each show from Florida to New York, all the way to California was sold out.

The drums beat on as I screamed out the next few lyrics. "I won't let the world decide. I'll die before that happens."

The drums stopped and the distortion was cut leaving a melodic strum of Nikolas's guitar.

The lights faded when walked off stage leaving the crowd screaming and yelling at the top of their lungs. Jex, Nic, and Rex had huge smiles covering their faces as they chugged the water the technicians handed us. This would never get old. Moments like this were the ones we lived and worked for. Once the chanting and clapping rose to the maximum volume, the four of us walked back onstage and gave the fans what they wanted, an encore.

Green and yellow lights flashed over the crowd and smoke hovered at the bottom of the stage. We played three more songs. People sang and swayed to the lyrics and music. Some jumped up and down, feeling the full beat of the drums while others banged their heads. The feeling of having thousands of people chanting my words would never become real. More often than not, I felt like I was in a dream, one that I never wanted to wake from.

During the last song, I pointed to the blonde. By the way she was dressed in a tight pink shirt and a skirt that showed the bottom of her ass cheeks, I knew she wanted to be seen. She could have possibly had this night planned from the beginning. Randomly, I chose a few others from the crowd to join us, to dance in front of our audience, to feel the temporary power. It was something I did every show, every tour. It was a habit of sorts.

Security helped the girls climb on the stage and they lifted their arms and shook their asses. Before the song ended, the technicians led the girls' side stage as cannons of small fireworks shot from the floor. After the final song, my brothers and played the crowd and threw drumsticks and guitar picks. The yelling didn't stop for minutes and the audience realized we weren't coming back out. I walked side stage where girls anxiously waited us. I smiled, popping an eyebrow at my chosen woman for the night, and she instantly came to me. I wrapped my arm around her shoulder and hers hung on my waist. My brothers stopped in the green room with the other girls, but Blondie and I walked to the bus.

"I'm Lindsey," she whispered in my ear before we reached the end of the hallway. I smiled at her and pushed open the exit door. Groupies and fans waited near the bus and as soon as we walked up they rushed it.

"I'll be out in a bit," I said, smiling at them with pearly whites. "My brothers are coming out that door over there. Really soon."

I hated to out their exit strategy, but I wanted to take my time burying my dick deep inside Misty or Christy or whatever the fuck her name was. It didn't matter. Names never did. 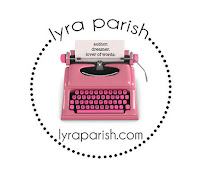 Lyra Parish loves to write, glamp, and sing obnoxiously loud at the top of her lungs in the shower. Sweet love stories (along with the dirty ones) make her gush. She is a firm believer that a person can never have too many cups of coffee, cats, or happily ever afters. When she isn't busy writing, she can be found sipping various beverages from her non-alcoholic drink buffet, pimp slapping excel spreadsheets, or riding her bike. Lyra lives in Texas with her glassblowing, guitar-playing hubby and black cat named Nibbler.

a Rafflecopter giveaway
Posted by Tonya Allen at 9:30 AM