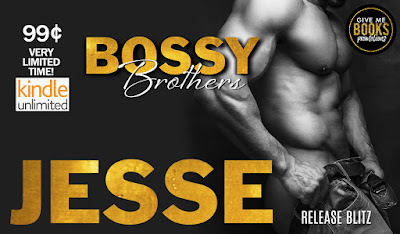 Thirteen years before Emma Dumas bought me in a bachelor auction to teach me a lesson she stole my heart down on Key West. I fell so hard for this girl I made all the promises. Only with Emma, I really meant them.

And then I disappeared.

But it wasn’t my fault. Let’s just call my reason “Family Business”. I’d tell you what that business is, but then I’d have to kill you. Just kidding. I can’t tell you what my family business is because it’s so secret, even I don’t know.

My point is… I didn’t ghost. It was a weird twist of circumstances. And OK, yes. I did hook up with pretty much every girl on the island that week. But after I met Emma, I was ruined. She’s the only one I wanted.

It’s been thirteen years. I’m a changed man. I STILL want her. I have ALWAYS wanted her.

But it’s kind of hard to tell her that with a gag in my mouth and a hood over my head.

Bossy Brothers: Jesse features a bachelor auction gone wrong, four smart ladies who botch a crazy revenge kidnapping, a fancy power dream date with fast cars, private jets, and expensive yachts, lots of ex-sex, and a happily ever after that proves… sometimes the best man for the job is a woman.

I’m outside. Where are you?
That’s what I text to Emma once I pull up in front of her building. She’s testing me but I’m ready for her today. I am willing to overlook the drugging and the kidnapping—but no one walks out on me the way she did last night.
No one.
So am I being petty and childish by demanding that she spend the day with me learning her lesson?
Absolutely.
Do I care?
Absolutely not.
I don’t even know what we’re going to do today. I have no plans other than monopolize her day. Make her waste time with me. Make her hate me.
This is what’s called the classic hate fuck, Jesse.
Her words are burned into my mind forever. I will never stop hearing her say that to me. Ever.
The balls on this woman. Giant, motherfucking bull-sized balls on this woman.
My phone dings in my hand just as a horn honks behind me.
I glance down at the screen and read her message. I’m right behind you.
Then I glance in the rear-view and see her waving at me from a… what the fuck?
She’s smiling broadly from the driver’s seat of a matte-black Lamborghini Huracán, her curlicue pigtails bobbing around her face.
She honks again. My phone dings. The text reads. Get in. I’m driving.
Oh, I don’t think so. I came here in a motherfucking Ferrari Portofino. Red. So I text back. You get in. I’m driving.
My phone rings. “What?” I ask, so annoyed. Because while the Portofino was an excellent choice, I do have to admit the Huracán has sex written all over it.
“I’m driving. Get in.”
“You’re not driving,” I say. “I’m the man, I do the driving.”
She revs her engine behind me. “We’re taking my car. If you’re a good boy maybe I’ll let you drive it.”
“I could buy my own Huracán, Emma. I don’t need to drive yours.”
I catch her smiling even bigger in the mirror. “We can compare dicks all day long if you want. But I’m not getting out of this car until we arrive at our destination. So. I suggest you pick and choose your battles carefully, Mr. Boston. Because as you can see, I’m sporting pigtails. And what you can’t see is that I’m wearing the same outfit I was that day at the shaved ice stand all those years ago.”
“Hmm,” I say.
“Hmm, indeed. This is your fantasy, right? You want to make me look like that teenager I was back then. Fine. I’ll play along. If you let me drive my car.”
“I don’t know where you got this car, but it’s definitely not yours.”
“It is now. I had it delivered fifteen minutes ago.”
“You bought a two-hundred-thousand-dollar car to impress me?”
“Two-seventy-five with upgrades. But who’s counting? And I didn’t do it to impress you, Jesse. Don’t be dumb. I did it to make you feel inferior.”
“So that’s how this is gonna go?”
“I have no idea what you’re talking about.”
“You’re trying to hate-fuck me with a car.”
“I… don’t really know if that’s a thing. But sure.”
I hesitate.
“You know you want to drive it.”
“I really don’t have a thing for fast cars, Emma. You miscalculated.”
She revs her engine again and it sounds like a fucking lion. Or a lion ready to fuck. One of the two. “Everyone has a thing for this car. Don’t you want to see the interior? I wish I had time to customize it myself, but oh, well. Listen to the sound system—”
The chorus of Smells Like Teen Spirit blares out into the city. Everyone within a hundred yards turn to look at her.
I check the mirror again and find her banging her head and laughing hysterically, her pigtails flying back and forth.
I text, Stop it. You’re embarrassing yourself.
She pauses her head-banging to text back. Get. In. The. Car. Now. Or I’ll roll down the window and ask that hot-as-fuck jogger to get in instead.
I glance at the jogger. He’s shirtless, sweaty, and not bad-looking—OK. No. He’s hot, even I can see that—and he’s also smiling at Emma like he wants to throw her down on the hood of that Huracán and fuck her right here in front of the whole city.
I get out, toss my keys to her building valet, and intercept the jogger with a hand in the air. “Back off, asshole.”

JA Huss is the New York Times Bestselling author of 321 and has been on the USA Today Bestseller's list 21 times in the past five years. She writes characters with heart, plots with twists, and perfect endings.

Her new sexy sci-fi romance and paranormal romance pen name is KC Cross and she writes novels and teleplays collaboratively with actor and screenwriter, Johnathan McClain.

She lives on a ranch in Central Colorado with her family.