**RELEASE BLITZ** The Trouble With Angels by Maggie Adams 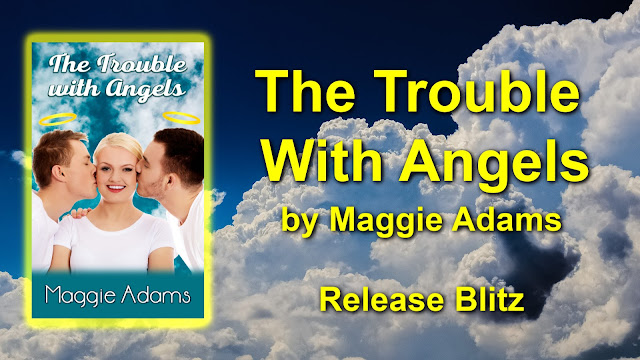 Christine Baxter was having a helluva night. Her blind date had run out on her and the check. She had run into a mugger who tried to steal her purse and succeeded. And finally, her beloved Beetle, Pinkie, had run out of gas on a deserted highway. Her only hope was a dimly lit club sign on the other side of a deep embankment riddled with trash. Apparently, her guardian angel had the night off.

Gabriel Easton and Michael Westmoreland were best friends looking for that special woman to share their lives and their bed. When the beautiful blonde literally fell through their club door, they thought their prayers had been answered. Michael knew she was sent from heaven. Gabriel felt she was hell on heels. Both agreed that she was perfect for them.

And Christine? Well, she thought she was in a lot of trouble.

Michael sighed. “Okay. We can’t send her out like this.” He shook his finger at Gabe. “But you check her. And notify someone that she’s here.”

Gabe nodded. “I’ll even stay up with her tonight.”

“I have no doubt that you’re going to be ‘up’ tonight, but you’re just going to have to suffer. The woman’s in no shape to fend off your seductions.”

Gabe was affronted. “I have no intention of that tonight,” he hissed. “God, you’d think I was a rapist or something.”

Mike saw Christine glance up in fear at hearing the word, and he hastened over to help her to her feet and explain that Gabe’s mouth overrode his brain on a daily basis.

She cautiously peeked at the men. “I can’t stay here. I’m grateful but I don’t know you.”

“Husband or boyfriend to worry about?”

“Gabe!” Mike scowled at him. He really did sound like some serial predator.

“I have an ex-husband and a friend, but she has three kids at home. I wouldn’t want to bother her.”

“Well, then, it’s either us or the hospital. Which would you prefer?”

Her lips trembled as a tear spilled down her cheek. “I don’t have any health insurance yet, so I guess it’s here.” She straightened. “But I’ll be gone in the morning and I insist on paying you for your hospitality.”

Gabe started to protest, but Mike waylaid him with a hand on his shoulder. “We can talk details later. For now, let’s get you comfortable upstairs.” He reached for her gently and cradled her in his arms, trying not to think about how good she felt right there.

Gabe trudged behind them, opening the elevator to the top of the warehouse. When it stopped with a slight bounce, the door opened, and he ushered them in to a stunningly decorated room. “Welcome home.”

Both Michael and Christine hesitated at the unusual pronouncement.

“Of course,” Gabe hastened to reply while Michael walked into the spare bedroom, wondering why he suddenly wanted her to stay forever. 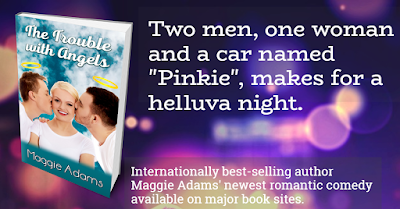 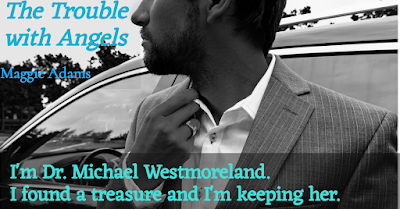 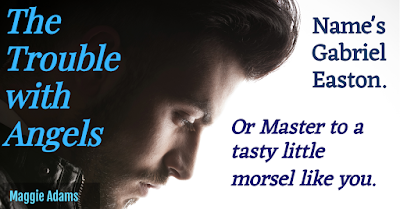 Maggie Adams is an international best selling romance author. Her first book in the Tempered Steel Series, Whistlin’ Dixie, debuted in Top 100 for Women’s Fiction/humor on November 2014. Since then, she has consistently made the Amazon bestseller 5-star list with her Tempered Steel Series. Her series has launched the tiny town of Grafton, Illinois into international recognition with sales in Mexico, Ireland, Scotland, Australia, and the UK. She is the recipient of various awards for excellence including Dayreader Reviews Best of 2015, the Readers Favorite Award 2016, the Indie Romance Convention Romantic Comedy Award 2017, and the 2017 New Apple Awards - Suspense

She also writes erotica, paranormal romance, young adult romance, and women’s fiction. Maggie’s books can be found on eBook and in paperback on her website and all book sites.

When she’s not writing, she can be found dancing, singing, and cooking (usually all at the same time), and spending time with her family and friends. 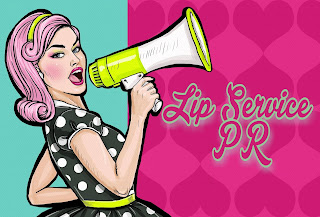