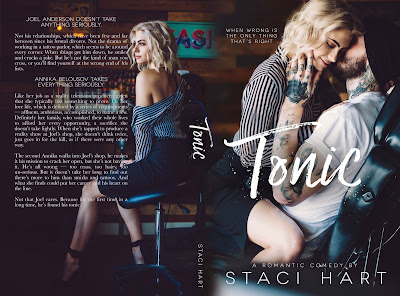 Not his relationships, which have been few and far between since his brutal divorce. Not the drama of working in a tattoo parlor, which seems to be around every corner. When things get him down, he smiles and cracks a joke. But he’s not the kind of man you cross, or you’ll find yourself at the wrong end of his fists.

Like her job as a reality television producer, given that she typically has something to prove. Or her love life, which is defined by a series of requirements — affluent, ambitious, accomplished, to name a few. Definitely her family, who worked their whole lives to afford her every opportunity, a sacrifice she doesn’t take lightly. When she’s tapped to produce a reality show at Joel’s shop, she doesn’t think twice, just goes in for the kill, as if there were any other way.

The second Annika walks into Joel’s shop, he makes it his mission to crack her open, but she’s not having it. He’s all wrong — too crass, too hairy, too un-serious. But it doesn’t take her long to find out there’s more to him than smirks and tattoos. And what she finds could put her career and his heart on the line.

Not that Joel cares. Because for the first time in a long time, he’s found his tonic. 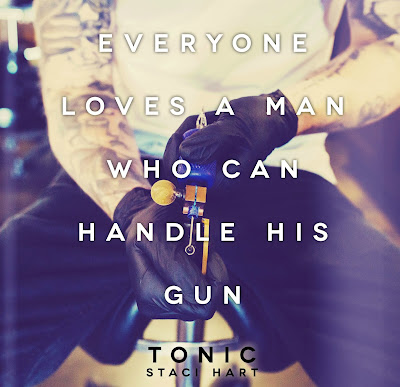 Staci has been a lot of things up to this point in her life: a graphic designer, an entrepreneur, a seamstress, a clothing and handbag designer, a waitress. Can't forget that. She's also been a mom, with three little girls who are sure to grow up to break a number of hearts. She's been a wife, even though she's certainly not the cleanest, or the best cook. She's also super, duper fun at a party, especially if she's been drinking whiskey. Her favorite word starts with f and ends with k.

From roots in Houston, to a seven year stint in Southern California, Staci and her family ended up settling somewhere in between and equally north, in Denver. They are new enough that snow is still magical. When she's not writing, she's sleeping, cleaning, or designing graphics.