**BLOG TOUR** One You Can't Forget by Lexy Timms 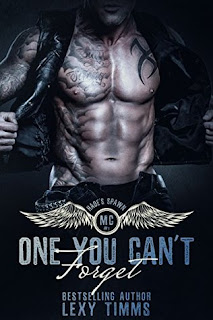 From Best Selling Author, Lexy Timms, comes a motorcycle club romance that'll make buy a Harley and fall in love all over again.

Emily Rose Dougherty is a good Catholic girl from mythical Walkerville, CT. She had somehow managed to get herself into a heap trouble with the law, all because an ex-boyfriend has decided to make things difficult.

Luke “Spade” Wade owns a Motorcycle repair shop and is the Road Caption for Hade’s Spawn MC. He’s shocked when he reads in the paper that his old high school flame has been arrested. She’s always been the one he couldn’t forget.

Will destiny let them find each other again? Or what happens in the past, best left for the history books?

This is part one of a serial series.  This is the first book by Lexi Timms that I have read.  I’m on the fence if I want to continue the serial or not.  This was an okay read and I don’t mind cliffhangers, at all.  This story is a lot shorter than I thought it was.  The story stopped at sixty percent and then we got six chapters of another book.

For Emily being twenty-eight, she doesn’t act like it.  She acts early twenties, and it was a little annoying.  I didn’t really connect with her at all.

Luke is her high school sweetheart.  Even though this is an MC serial, there wasn’t much about the MC in the story.

There wasn’t much build up to the “ending”.   It wasn’t a cliff hanger that made me feel like I absolutely have to read the next part. 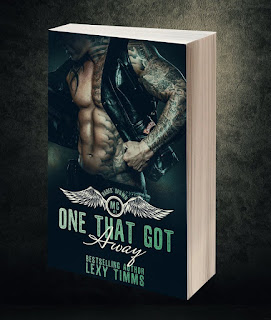 I'm a dreamer, a big romantic dreamer who pulled up her jeans and sat down to put the story I had in my head to paper. Thus SAVING FOREVER was born... and shortly after THE UNIVERSITY OF GATICA series. My Historical Romance series, HEART OF THE BATTLE SERIES has just released and I'm currently working on a Billionaire series that'll steal your heart - BOSSES.

To find out a bit about me, my books and series, and other tidbits of interest (well, I hope you will find them interesting) follow me on Twitter and Facebook by clicking the buttons below. You can also visit my author page on Amazon!