**SPOTLIGHT TOUR With Giveaway** Start Over by J. Saman

"This is just a wonderful story. Ms Saman puts you in the story, she tells the story from both main characters point of view so you know what's going on in both characters minds and I really like that. The first chapter sparks your interest and she holds you tight right to the last page. She leaves you wanting more." ★★★★★ Debbie, Goodreads Reviewer

"From the opening chapter, this book had me hooked. I thought it was hilarious and I seriously wanted to befriend some of these people. The twists and turns kept me guessing and the lead is amazing. Great read for any occasion." ★★★★★ G.M. Whit, Goodreads Reviewer

I like to play by the rules. But when I get coaxed into crashing a party, I run into the last man I ever thought I’d see again, my one and only one-night stand, Luke Walker. It's been ten years since we’ve seen each other, but our chemistry is just as palpable as it was that night so long ago. Only problem is, I’m leaving in one month for a pediatric fellowship across the country.


I like to keep everything close to my chest. But when I see Ivy Green again, the woman I was never able to get out of my mind, I want her. It doesn't matter that my dark past and dangerous present mean I can't keep her. That my secrets would destroy any shot at a real future. After all, she's leaving in a month. What's the worst that could happen?

I was half joking last night at the idea of no-strings sex. I know it’s not possible.
She’s an all or nothing girl. I knew that the moment she spoke to me that first time, which is why I chose nothing all those years back. I had to. My life was too uncertain and I was not about to drag her into that with me.
And now the game maybe different, but I’m still a key player in it.
Yet, I’m so oddly drawn to this breathtaking creature that my thoughts are consumed by her. I’ve never wanted to be connected to another human the way I find myself wanting to be connected to her.
“I was hurt when I woke up and you were gone.” Her quiet words jolt me out of my thoughts and her admission stuns me into silence. “But I figured that’s what happens after a one-night stand and I should just get over it and remember it for what it was. So I dated other blokes and I went on to medical school and all was great—until Jason of course. I did think about you from time to time.” I squeeze her hand and she squeezes back. I can’t stop myself from smiling at her, but I don’t offer anything more because I can tell she’s not done. “I placed as a resident in the hospital here, followed by my fellowship, and that’s what I’ve been doing ever since.”
Ivy turns to look at me and that one simple expression says she gave everything we discussed last night a tremendous amount of thought.
“I’ve worked unbelievably hard, Luke. Four years of medical school. Three years of residency, two of my regular fellowship and now a certificate fellowship that I’ve been dreaming about for these nine years—for most of my life. It’s my goal. The end game of my education that will lead me to the position I want. That’s how it works and I can’t let anything get in the way of that."
She pauses, sitting there holding my hand and watching me intently.
I angle my body to face hers, abandoning her hand in favor of her face, which I hold like it’s the most precious thing in the world.
“I’d never mess with that. Never in a million years. I think you know that, otherwise you wouldn’t be sitting here with me now. I realize I’m screwed up. That I send mixed messages and do everything with you backwards. But I want to change that. I do. I tried to tell you last night. I just want to spend some time with you. That’s all. Nothing more.”
Ivy nods her head and I release her face, taking her hand again, but whether she understands me or not is something else entirely.
“So, friends?”
“Yup. Friends.”
We fall silent again, sitting out here in the freezing cold, watching our breath vaporize into the morning air.
“I’m sorry I left you that morning. It was a chicken-shit thing to do and even though I think we both know why I did it, it doesn’t excuse my actions.”
She shrugs a shoulder. “It is what it is and it’s fine. Thank you for the apology and it is accepted.”
“Awesome. Can we go inside now? I’m freezing my balls off.”
“Wouldn’t want that, would we?”
She moves to stand up, but before she can get very far, I jerk her back down.
I lower my lips to hers because they’re right there and I’ve wanted to kiss her since I heard that melodic voice in the dark two days ago.
Fuck friends. I’ve dreamt of this girl for a decade.
I kiss her lightly at first, rediscovering her flavor. The cinnamon and vanilla sweetness is still as intoxicating as it was the first time I pressed my lips to hers. Our soft languid kiss quickly morphs into something fueled by years of pent-up frustration.
That and I’m desperate and terrified that she’s going to push me away any second, so I’m kissing her like it counts. Like I’m fighting the damn clock, because in a way, I am.
But she doesn’t push me away, so I take her lower lip into my mouth, sucking it just a little to get a deeper taste. My memory of her mouth has not done it justice. It’s infinitely better. Warm and soft, and so goddamn sweet.
Parting her lips, my tongue sweeps against hers, a groan escaping from the back of my throat. Her mouth conforms to mine, allowing me to lead us. We’re at the precipice here. One small shove and we’ll be tumbling into an inescapable abyss.
Amazing what one kiss can lead to. 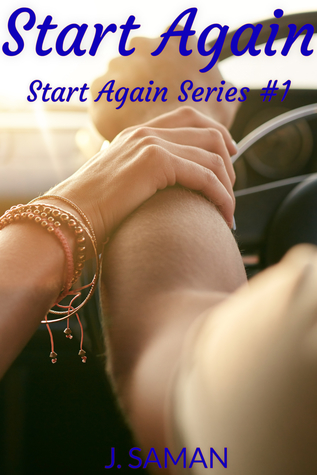 Author J. Saman lives in New England with her husband and three daughters. When she's not writing romance and looking after her busy family, she works as a nurse practitioner. J. is a lover of picking at old wounds and second chance romances. She likes strong female leads and sexy alpha men with a sweet side.