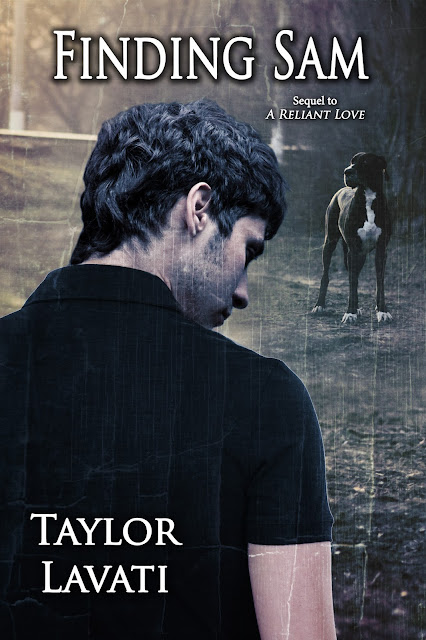 Blurb
Sometimes, the past isn’t supposed to be forgotten.Sam is convinced he’s cursed. Everything he touches dies. He leaves his past behind and travels across the country, hoping the distance will save the loved ones he’s left.  When his car breaks down, he becomes stranded, finding comfort in a stray dog.Despite the fact that he refuses to build any relationships, the people of Sterling, Colorado wiggle their way into his heart. His adopted dog, Lucky, shows him he can handle responsibility. His new boss, Lenny, shows him he has purpose. His neighbor, Izzy, shows him he’s capable of love again. But can Sam find happiness after he’s lost it all?
Finding Sam, the sequel to the bestselling novel of addiction and attraction, A Reliant Love, is a tale of redemption, acceptance, and finding yourself.

Excerpt One
“I shouldn’t be here,” I mutter under my breath.
“Like in this town or here in the kitchen with me?” She quirks her head to the side and crosses her arms over her chest. It’s defensive, but not, at the same time. More likely a precautionary arm cross.
“Both.”
“Do you not like me? I know I can talk a lot, and I’m trying hard to be positive in this awkward situation. Sometimes it’s just one comment too much that can set someone off. I’m sure you can tell, but I’m normally really upbeat and positive.” She nods like a hundred times.
“Why?”
“Anything can happen at anytime, so you have to live every day like it’s your last. That guy just pisses me off.” She shakes her head, dragging in a loud breath.
“Listen, I’m not begging you to like me,” she says as she slams the refrigerator door shut. “It’s just that you’re new around here, and I saw you as a clean slate. I just want to be friends, so if you have a girlfriend, that’s fine.” She steps forward and grabs my forearm. I stare down at where our bare flesh connects. “Seriously, I’m not a relationship person. I don’t believe in relationships, but I do respect them. I’d never step on another girl’s toes. I just want to be friends.”
“I’m leaving the second my car is fixed.” My words ring with finality. Her hand falls from me as she steps backwards towards the fridge like I slapped her. 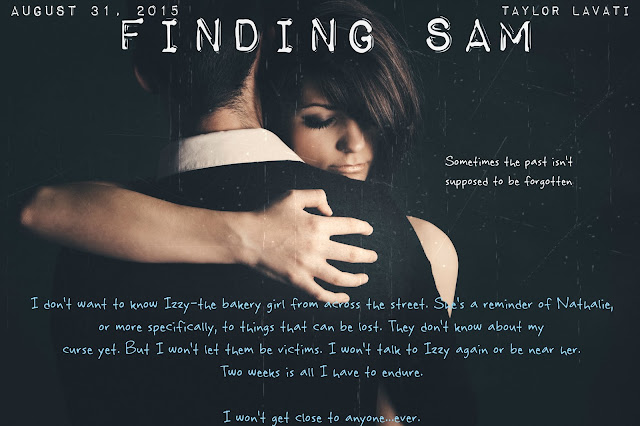 Character Interview
1) Sam - In Reliant Love, why did you accept the fact that Sarah's accident was both of yours, but you couldn't accept Nat's as both of yours?

At first I didn’t accept the fact. It took my time in rehab to understand that other people made decisions that led up to the accident with Sarah that night. Pete let Sarah and I leave the party. It’s not like I forced Sarah to get in the car with me. If anything, she pushed me to leave so we could hang out alone. Karen, my therapist, explained all that to me. She told me I was thinking irrationally.

With Nat, I know it’s my fault. She would have never been in the car if I hadn’t gone out with Frank and gotten drunk and high. I relapsed that night to the point that I barely remember certain parts. It’s just a blur. And there’s a sliver of doubt in my head that tells me it isn’t my fault, but I’m so angry and sad, I don’t know what to think. I still take the blame.

2) Izzy- We first meet you in Finding Sam. Can you tell us a little about your past?

Oh, sure. I’m a pretty average girl. Well, I got to Sterling when my mom dropped me at my grandpa Lenny’s. My mom was a drifter. She used drugs and lived what she liked to call a gypsy life. Once I had to go to school, she dropped me here and never came back. Then she died so I got to stay with Lenny full time. He brought me up. I left Sterling to run away from my problems, but of course, came right back. Lenny used his savings to buy me the bakery. It’s right across the street from his store. I think he did it just to keep an eye on me. So that’s the past, and now I’m here.

3) Sam- How are you coping with your loss?

I have no idea. It’s literally day by day. Some are worse than others and some are really worse than others. I count the days by how long she’s been missing. I pray that maybe it’s all a sick dream. But when I shut my eyes at night, she visits me and I know my dreams are only worse than reality. I think I’m still angry that this happened. I can’t move past it because it still pisses me off and aggravates me.

4) Izzy- Are you looking for love?

Definitely not. Sure, I’d love to be in love someday, but at this point, I don’t think I’m ready. I don’t even know if it’s something I believe in. It’s hard to have complete trust in another person when you really have no idea what they’re thinking or what their intentions are. It’s scary. So while the idea of love is great, I just don’t think it’s something I can handle. I’m not the most stable person.

I have no idea! It’s funny you should bring that up because I’ve always wondered if anyone else knew the difference between cooking and baking. I think there are too many variables in cooking, add a pinch of salt here and the entire meal is ruined. Where with cooking, it’s more precise and if you add a little extra chocolate, odds are the desert is still going to be good. I have no idea what my problem is, but I cannot cook a single piece of pasta if my life depended on me.

6) Sam- When you were helping Lenny at the general store, did you learn anything about yourself?

Definitely. I think I learned more in those first two weeks in Sterling than the entire rest of my life. Having this job where I saw the differences I was making, made it easier to keep going. I would work my entire body to the point of exhaustion and then all I could think about at the end of the day was going to bed. It distracted me while helping me grieve. I learned that I’m maybe a little stronger than I thought I was. And by getting to know Lenny and how important his store is to him, it made me care.

7) Izzy- Is there anything in particular that drew you to Sam? And how is that your dog's won't leave each other? Are they friends or having a relationship with possible puppies?

In Sterling, we don’t get a lot of passerbys. And I’ve always felt stuck in the town like I can’t breathe sometimes. So when Sam first showed up, I was so excited. I wanted to get to know him and be friends with him. As time went on, he pushed me away and I realized there was depth to him. I kept wanting to know more and more about him. In a brooding angry kind of way, he’s somewhat charming.

I want Killer and Lucky to have puppies so bad! I think the two are best friends. They’re both neutered so some weird tiny-big puppies are out of the picture, but still. I think Lucky and Killer are the best of friends. They’re opposites in every aspect, but it makes them best friends. I don’t know. They’re just the best dogs ever.

8) Sam- Why won't you let Petey into your life? Are you afraid of something? Judgement perhaps?

I met Petey so damn long ago, he’s more family than my real family. It makes it really hard for me to disappoint him. After the accident with Sarah, I never thought Petey would speak to me again. I probably went to the same college as him just to attempt to make amends but I was always so scared. When I checked into rehab, it felt like this was a new beginning for Pete and I. And, you know, things were good until the accident with Nat. And I just don’t want to lose him again so I figure if I push him away first, it won’t hurt as much.

9) Sam- What is it about Izzy that makes you think about Nat?

At first, it was the light that shined naturally from her. They both smile like crazy, emit this positive energy you can’t ignore, and put hope in me. But that’s pretty much as far as the similarities go. Looks wise, they’re polar opposites. Nat was blonde, tan and light-eyed. Izzy has fair skin, near-black hair, and chocolate eyes. Where Nat was so innocent and forgiving and she let me walk all over her, Izzy would never allow that. She’s smart, she understands the world I’ve lived in. It’s just so different.

10) Sam & Izzy- How do you feel about Lenny having cancer?

Sam “You can go first.”
Izzy “Well, we first discovered the cancer about two years ago. He’s been fighting really hard and luckily it hasn’t been progressing. I hate seeing him in pain so I try really hard to make him comfortable and get him his favorite things. He has this slippers he loves to wear after we go to the doctor. He calls them pillows for his feet.”
Sam “Not knowing what’s going to happen is the worst part. Any time I hear him cough, I worry it’s going to be the last. It’s like walking on eggshells through life. He’s become such a staple in my life, I don’t know what it’d do to me if I were to lose him.”

BONUS Sam & Izzy- Where do you see your future?

Sam “Honestly, I’m just happy to have a future. It took so long for me to get to a place of peace so I take it day by day and try not to look too hard into the far future. Right now, I need to take Izzy to her doctor’s appointment and tonight we’ll have dinner together. Tomorrow I’m working at the store all day and receiving a shipment. That’s how I live now.”

Izzy “He’s so negative! But it definitely helps us both to live at the edge of our seats. There aren’t many expectations except honesty. As long as we’re both honest with each other and communicating our feelings, I think everything will turn out fine. He’s important to me. And I think he knows that.”