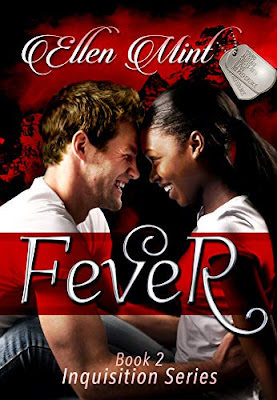 Hot soldier + brilliant doctor = a thrilling romance in the desert sands.
Doctor Mae Jones had no idea when she agreed to assist the army in vaccinating children half-way around the world what she’d face. She didn’t sign up for a sexy British officer trailing her every move, his giddy smile and sunshine good-looks distracting her. Nor did she expect the sudden rebel attacks and bullets flying while she attempts to try to cure an unexplainable virus about to threaten the whole world. It’s up to her to try and stop a war before it even begins while she keeps falling for this man who’s her total opposite in every way but the heart.
In the second entry of the Inquisition series, this stand-alone novel presents Alistair Young. For those tired of the alpha who want someone sweet as cotton candy, Alistair is your man. Easy on the eyes, and light on the heart — he’s prone to cracking jokes and playing card games with the sick kids. For all his easy-going ways he knows how dangerous growing close to the new genius doctor can be, but he can’t look away either. 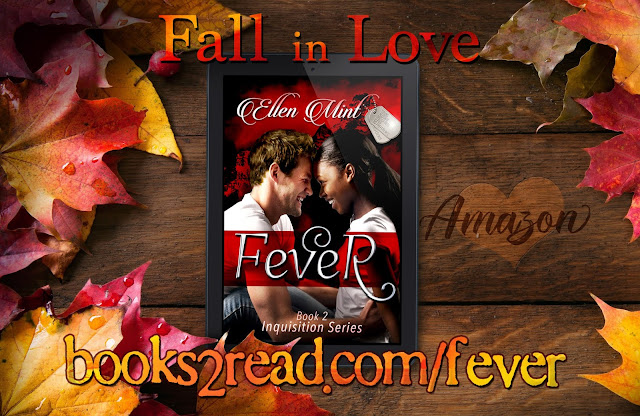 “I am so happy that Ellen Mint wrote this amazing page turner. This book will keep your eyes glued to the pages.” —Penny L

“Tibbs, where did you bugger off to?”
Mae turned to the man and tried to not gasp. Even in this drab, olive world of papers, bureaucracy, and bullets he looked like a ray of sunshine. Copper gold hair pushed up high off his forehead, eyes of a mischievous brown that put her mind of an old golden retriever a neighbor had, and a smile… His smile was so deep it excavated two dimples on both sides of his pale cheeks. In her flippant heart, Mae wanted that beam of light to focus on her, but his eyes were fully upon the sergeant.


“Had to do a pick up,” Tibbs said, jabbing her thumb to the woman standing in the shadows.


When his eyes swept over her, Mae was ready. She dug her fingers tighter into her rucksack to not do something foolish like thinking she could take his hand. Or babble about how handsome he was. “Well,” the mystery man somehow smiled wider, “welcome to the family.”


He stepped even closer, meeting Mae almost eye for eye. His hand slipped off the butt of his gun for her’s and she squeaked out the first words in her brain, “You’re English! I mean, your accent, it sounds…uh…” Oh, dear god. What are you doing?


The man chuckled, “Scottish, if you want to get technical. But lived a bit everywhere, absorbed a bit of everything. Bit of an accent bastard, I suppose.” His smile didn’t dim, but the proffered hand began to lightly shake as if he wanted to pull it back.


“I just…” Mae scratched at her head, then hissed at herself for being foolish, “I thought, this being the army that…”


“No Brits allowed?” he shrugged his sunny shoulder and wrinkled the tip of his long nose.


Sweet lord, he should not look so adorable. He’s a marine, or soldier, or whatever. Man’s holding a gun right now!


“He ain’t in the army,” Tibbs spoke up, turning away from whatever paperwork she was filling out. “Wardens. The clowns running this circus.”


“If that were true why aren’t you all in your requisite red noses and floppy shoes?” he called to the sergeant before focusing on Mae. “Name’s Alistair.”


“Mae,” she let her fingers slip into his warm ones. Grip tight, give it a hearty shake. Don’t let the soldiers boss you around. You have every right to be here. But he’s smiling so pretty and his palm feels like a warm hug. Her turncoat eyes drifted to his wrist, dooming her.


A clip of boots rescued her from drooling on his toned forearm, both of the soldiers snapping to attention and their hands tapping to their foreheads. “Sir!” both Alistair and Tibbs shouted.


“Sergeant,” the newest man nodded to Tibbs before turning to Alistair. He was lean, like the type of sort who can’t sit still long enough to put fat on. A hearty mustache wound across his upper lip, the black hair seeming to tickle his mouth when he talked. The face reminded her of an old librarian or professor, not at all a strict soldier commanding the troops.


“Captain Young,” he nodded to the ray of sunshine who was gulping and patting the butt of his gun. Calculating grey eyes sized up Mae and a smile graced the man’s mustache, “I am guessing you are…”


“Wait, wait,” Alistair inserted himself into the greeting. “No chance in…Tibbs had to have screwed up. You cannot be the new doc. You’re too cute,” he said with a laugh in his voice.


Her hackles transformed into spikes, Mae’s lips pursing into a tight line and she turned on the man. “I assure you,” Mae’s tone could flash freeze the desert they drove through, “despite my age, gender, or other aspects you question I am more than qualified to serve as doctor for this expedition.”


“Ah, tour,” Alistair said, gulping deep. He had enough sense to know he said something wrong, but clearly no brains to understand what.


“You know what I meant,” Mae hissed at him. 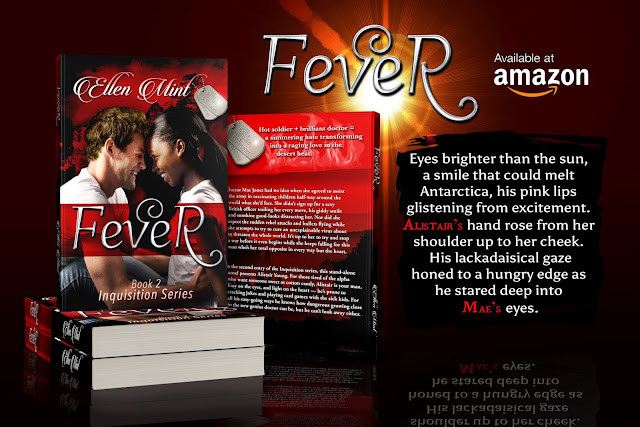 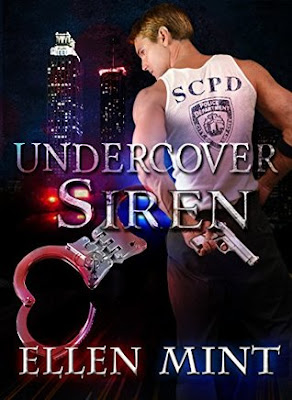 Ellen Mint adores the adorkable heroes who charm with their shy smiles and heroines that pack a punch. She recently won the Top Ten Handmaid's Challenge on Wattpad where hers was chosen by Margaret Atwood herself. Along with her husband and black lab, she spends a lot of time with her skeletons -- don't worry, they're just Halloween props.