*BLOG TOUR, REVIEW AND GIVEAWAY for KICK by Carmen Jenner* 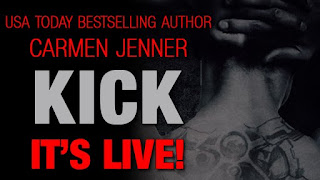 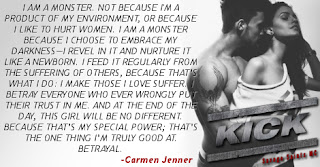 Excerpt #1
“You gotta let go now, Princess. I gotta hand you over.”
Her panicked gaze meets mine. “He’ll shoot you.”
“No, he won’t.”
“Yes, he will.”
I smile down at her. “What are we just gonna stand here forever, you in my arms, your dad holding a gun to my head? If he shoots me, he shoots me. Ain’t nothing I can do about that, Princess. At least I’ll know I did one thing right.”
She takes a deep, shaky breath. “I’d be dead if it weren’t for you.”
I nod, because it’s true. If Slayer hadn’t come at a deal, Prez would’ve eventually killed her, and he’d have tortured her some more first. “Promise me somethin’?”
“What?”
“Get on your feet and then get the hell outta here. Prez will come looking for you again. He’s not a guy who likes to lose. Take as much money as you can, and get the fuck away from this life, otherwise you’re gonna wind up filling a body bag way too young.”
Lauren is wrenched away from me then. She screams as the Italian carts her off toward the clubhouse, flailing and slapping at him despite her injuries.
“Daniel!” she screams, reaching out toward me as he struggles to get her inside. Without thinking I take a step forward, but I’m attacked from behind. My knees go out from under me and I’m shoved face-first into the ground. Some heavy motherfucker sits down on my back. I buck, trying to unseat him, but I’m whacked in the back of the head until I stop.
“Well, isn’t that fuckin’ touching? The Angel scum, in love with my daughter? Didn’t I warn you away from her once before?” Slayer asks, circling me like a predator circles prey. The biker using me for a chair shoves his gun against the back of my skull.
“Yeah, I did,” Slayer continues, and he motions for the guy on top of me to force me to stand. I’m dragged up by the hair and presented to Slayer. “At the rally, where she fuckin’ went missin’!” His red, blotchy face almost touches mine. He’s so close I can see the blood vessels snaking out from the corners of his eyes. He’s fucking high. His daughter’s been locked up, raped, beaten, treated like a fuckin’ animal over some shit that she shouldn’t even have to know about, and the arsehole’s gettin’ high as a fuckin’ kite instead of findin’ her? He makes me sick. He’s everything I hate about the life. And he’s more than likely exactly where I’ll end up, because this is what we are—this is what livin’ in the club gets you: bitterness, enemies, and a shit-tonne of bad blood.

"I'm not the hero in this story; I'm the motherfucking villain."-Kick

Pain, despair, hate, revenge and redemption... those are just a few thing's this book is full of

"I am the king of shit, and my throne is built upon bodies of all I have betrayed; my crown is made of her teeth and tears."-Kick

In 'Kick' we get two POVs, plus 'then' chapter's. Different, but totally enjoyed it. We see and get to understand why Kick is the way he is. And God, I don't blame the guy.

Kick will stumble upon and rescue her from her own personal hell, but thinking that was the end, was just the very beginning.

She's been tormented and tortured, barely hanging on. With a fateful encounter with Kick, a Savage Saints brother, he will rescue her. But is being rescued even worth it after your life has been turned upside down, in the worse way possible.

"I'm not a lamb you can lead to the slaughter, Father, I'm a motherfucking Lioness."- HER

Getting revenge, watching blood spill is what she wants, but will that even allow her to move on? Will the demons still reside?

"Her surrender is the only religious I need."-Kick

If you like MC reads with blood, guts, revenge and redemption, then Kick is the book for you. Kick has lost himself a long time ago, but will rescuing this broke woman bring back a piece of him? kick is one of those characters you want to save and love. My God, I broke for her. Her story isn't a easy one to read, not at all. You'll want to mend her, hug her and tell her it'll be okay. Carmen Jenner knows how to take you to that dark place with her writing, and guides you back to the light. I did have a littl bit of trouble with the Australian slang, but you'll get used to it. 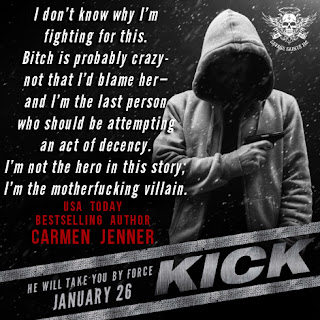 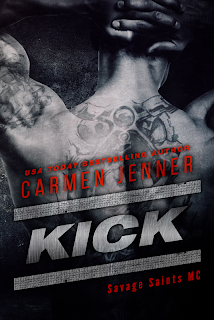 Blurb
When I was ten, my father indoctrinated me into the family.
A brotherhood who would fight, protect, and give their lives for one another. A club whose ties ran thicker than blood, murkier than the dirt and grime that tainted my soul. Stronger than the bonds that connected me to my own family.
A band of brothers, where loyalty was kept and paid in a currency of blood.
When I was twenty-seven, I betrayed that brotherhood.
I’ve spent every day since running, avoiding paying back that debt.
My name is Daniel Johnson.  I have betrayed everyone I ever loved.
And I’ll betray her too.
This is my story—if you’re screwed up enough to want to read it.
Warning: KICK contains graphic violence, profanity, drug use, and explicit sexual situations of a taboo nature. Intended for an 18+ audience only. Not intended for pussies. 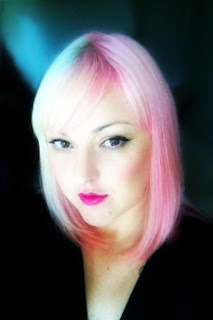 Carmen Jenner
Carmen Jenner is a thirty-something, USA TODAY Best Selling Author, doctor, pilot and CIA agent.  She's also a compulsive, flagrant prevaricator who gets to make things up for a living.
While Sugartown may not technically exist, Carmen grew up in a small Australian town just like it, and just like her characters, she always longed for something more. They didn't have an Elijah Cade, though.
If they did, you can be sure she would have never left.