After a devastating loss, Anna Johnston has finally gotten the pieces of her life to fit back together and has created a comfortable pattern for her and her son, Roman. Trying to protect both of their hearts, Anna has given up on dating accepting that she will never completely heal from losing Roman’s father. Noah Evans just got out of a relationship based on lies and isn’t looking for anything permanent. New to town, he and his friend and business partner are focused on finishing their new remodel and making money. One boys’ night out introduces him to Anna and all of that changes. Noah wants something real; a place to call home.
He might be pushy, but Noah is determined to get what he wants. Just as Anna and Noah start to come together, someone from the past comes back to cause trouble. Can Noah convince Anna to take a chance on him and break free from the pain of her memories? Will Anna look past what she cannot change to see a future that includes Noah? **Due to graphic sex scenes 18+ please

“Are you going to stare at the door all night or are you going to come in here and explain what I just walked in on?” Christine’s shout from the living room pulled me out of my stupor. I turned and walked to the couch. When I sat down, I curled my legs underneath me and hugged one of the pillows. I didn’t know what to say. I wavered between showering Noah’s scent off of me and reliving the whole scene with my sister. She waited a few heartbeats, letting me settle, before making me spill. “Alright Banana, I’ve given you a minute. Now, tell me again how you’re not interested in dating Noah? You seemed pretty interested as the two of you were eye fucking all night and I’m pretty sure you’re not supposed to suck face with guys you don’t want to date.” She quirked her lips and held back the laughter I knew was bubbling up inside her. “There was no eye fucking and what you walked in on was a momentary lapse in judgment. He took me by surprise, is all, and it won’t happen again. I don’t have time and I won’t have a parade of men in and out of Roman’s life. This isn’t even worth talking about.” I was angry now; angry at Noah for kissing me, yes, but more angry that I let him. Hell, I did more than let him. Now I was knocked off kilter, feeling too much about someone I had just met. My world had spun out of control. It was one hell of a kiss though. “You know sis, it’s ok to be a priority too. You are the best mom Roman could ask for. No one is asking you to stop being that for him. We just want you to take care of yourself too. You deserve it, honey. I know you don’t want me to say it, but I’m going to anyway. Henry would be so disappointed that you are holding yourself back. He never would have wanted you to be lonely. You have to believe that.” Tears filled both of our eyes; I knew she was right. “I’m so afraid, Chris. So many things could go wrong, and it won’t be just me that suffers. I need to think of Roman. Maybe if Noah is willing to go slowly, really slowly, maybe it could work.” I stood and walked over to her, giving her a hug. “I need to sleep. It’s been a big night.” She nodded at me and I turned to go to my room. Shutting the door, I let silent tears stream down my face. 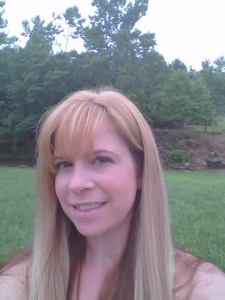 Rachel Caid lives in Missouri with her husband and two sons. She is a self-proclaimed coffee addict with no plans on recovery and an avid reader of all types of romance. Her day job is very black and white, so she enjoys being able to lose herself in the colorful world on novels; whether it’s reading or writing them. Find her at: http://www.facebook.com/authorrachelcaid
Facebook | Twitter | Email | Goodreads